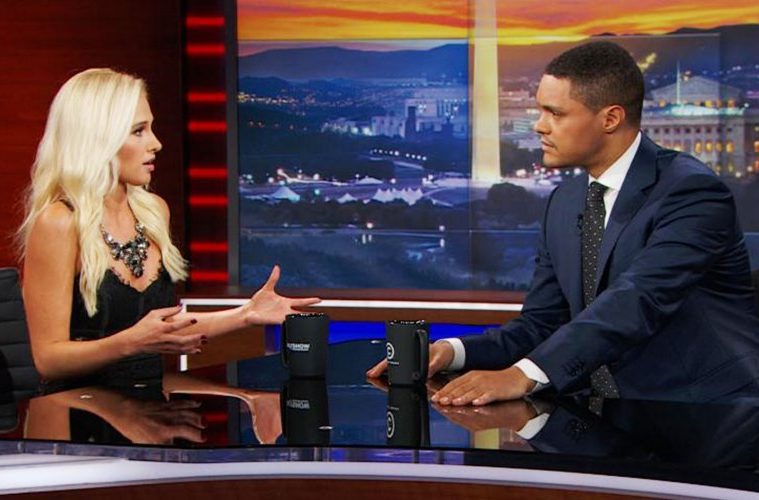 Trevor Noah gets the controversial Tomi Lahren together!!! Watch as he calmly puts her up on game

We love the witty, cool and collected Trevor Noah for more reasons than we can name, and his interview and debate with the Conservative commentator Tomi Lahren has now been added to the top of the list!

The Daily Show host schooled Lahren on her comments made about the Black Lives Matter movement, her dislike for Colin Kaepernick’s protest against the national anthem, and how anti-Trump protestors are “crybabies.”

Although Lauren did not seem to want to understand the points made by Noah, stating that “It’s just that there are things that need to be said, and a lot of people are afraid to say them,” that did not stop him from challenging her rather offensive views.

After calling the Black Lives Matter movement the new KKK, Noah expressed to her that “Just because you say the thing, it doesn’t mean that’s what it stands for. You’re the same person who argued on your show that just because Donald Trump has supporters from the KKK, doesn’t mean he’s in the KKK,” gaining several applauses.

After the interview, Trevor even showed The Blaze host some love on Twitter:

Thank you for being my guest Tomi. Our goal should be to destroy these "bubbles" not each other. You're always welcome on my show. https://t.co/AairL3cdAy

Although their views are obviously clashing, we are glad to see them discuss both sides in a civil manner, no matter how much we may agree or disagree with either of them. Do we see some sort of progression and understanding in our future…? We hope so!

If you haven’t seen it yet, take a look at the FULL interview below!