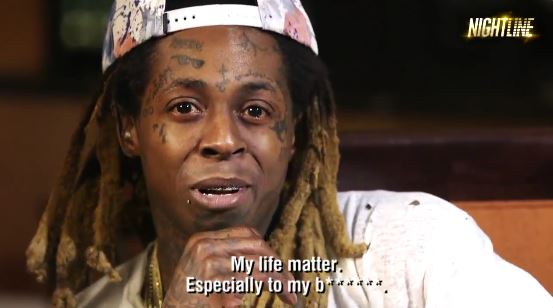 He looked filthy and high, and sounded like a fool. Not because of his stance — or lack thereof– on the issue of Black Lives Matter, but because he sat on a major television network and totally disrepected African Americans, his generation and women.

Lil’ Wayne sat down for an interview with Linsey Davis on ABC’s Nightline and let one curse word after another leave his diamond-encrusted mouth speaking enough fuckery and foolishness to last a lifetime.

Yes, in his words — he IS a rich black motherfucker.
Yes, in his words — HIS LIFE matters to his BITCHES, as he says. (Wow, to the women in his world who are honored by that statement.)
And yes, it is OK if he feels that he has not experienced racism.

The problem is that …simply…WHEN HE OPENED HIS MOUTH TO TALK… he came across as an uneducated pot head — and while the jury is still out on whether or not he was “High as Cooter Brown” during the interview, we know this man is SMARTER than that. The fact that he is a lyrical genius on record lets us know that there is something cooking in that brain of his… it was just stir fry that night…perhaps.

It seems that Dwanyne Michael Carter Jr., who grew up in the poor Hollygrove neighborhood of New Orleans, takes for granted that, while his rap success helped pull him out of the projects — and hence — out of the realm of neighborhood police, there are so many of his brothers and sisters subjected to scrutiny that he would likely also be facing if he WAS NOT rich, and walking around with dreads, dark skin and face covered with tattoos.

All we can say is “le sigh” and be embarassed that this article, like his mouth, is full of foul language. But it was written this way to PROVE A POINT!

What point did Lil’ Wayne make, except (temporarily) pissing off some of his fans? Because even though he sounded like a buffoon, his albums will continue to break records, and he will still be a RICH — albeit is -DISCONNECTED — motherfucker. And that is the way he wants it, in his own words.

Come on Weezy, we’ve always rode with ya, just not on the way you represented…my brother. Time to get WOKE!

Take a look at the “Black Lives Matter” comment in the snippet below:

And watch the FULL INTERVIEW here: