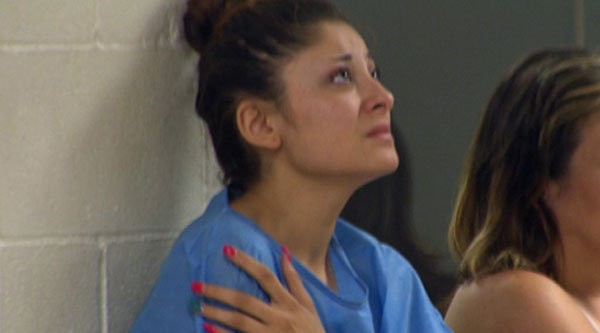 HOUSTON—Dressed in blue hospital scrubs and constantly wiping away a flood of tears, an 18-year-old stood before a Harris County judge Wednesday morning to hear charges filed against her for causing a deadly crash a day earlier.

Dalia Iris Alfaro works as a dancer at Sin City, a gentleman’s club in southwest Houston which is open from 11 a.m. to 2 a.m., according to the company website.

The management of the club said they’ve handed over their own surveillance video to HPD showing that Alfaro was not served any alcohol at their establishment and that she left around 4:30 a.m.  But just two hours later, the teen was drunk when she killed an innocent driver on the road, police said.

It was shortly before 6:30 a.m. when police saw Alfaro driving a silver Dodge pickup truck 60 miles an hour in a 35 mph zone on Westheimer near Gessner.

As the HPD officer attempted to initiate a traffic stop, Alfaro fled westbound on Westheimer with the officer pursuing. Alfaro then struck a vehicle at the intersection of Kirkwood and Westheimer and continued without stopping.

“The vehicle stopped. Officers pulled up, got out of the patrol vehicle and at that point, the suspect’s vehicle reversed and took off again,” said Victor Senties, HPD spokesperson.

Police said Alfaro was going 85 mph when she ran a red light at the intersection of Eldridge Parkway, struck a green Mazda 3 and then struck the driver’s side of a gray Chevrolet Impala. Her pickup then veered to the left and struck a cement mixer truck head-on.

“It all happened real fast. Boom, boom, boom,” said Bobby Smith, a witness at the scene.

And as quickly as the crash happened, a life was lost. The 29-year-old Impala driver died at the scene. The Mazda driver was not injured.

Alfaro was transported to Memorial Hermann Hospital Southwest to be treated for minor injuries and, after a blood draw, was determined to be legally drunk. Charges were then filed.

As she sat on a bench in the courtroom, she crossed her heart and appeared to make a prayer before being called to face the judge.

Alfaro was charged with murder and intoxication manslaughter. Her combined bond amounts totaled $80,000.

“It was her decision to flee from the officer and you see what the result was. It cost an innocent citizen their life,” Senties said.

Although she was clearly emotional about what she did and/ or what she was facing, authorities said this was not the first time Alfaro’s been in trouble with the law.

According to court documents, Alfaro has prior convictions of evading arrest, graffiti and possession of marijuana.

To see video of the suspect in court, more pictures and related articles, visit KHOU.com.

Family and friends of the victim said he was a talented B-Boy, known around Houston for his dancing skills.  They posted news of the crash on a B-Boy website.