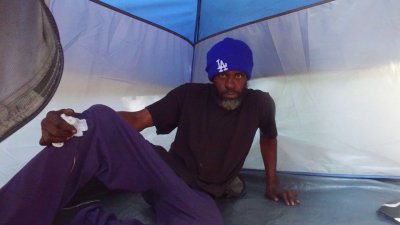 EDITORS NOTE: I personally spent a day with this homeless man, Mario, and produced this piece, which originally aired on CW39 Houston, where I served as manager of the web department. This is one of my pride and joys, which I am sharing with my NewsWithAttitude.com audience.

HOUSTON — While most of us are walking around in our comfortable bubbles, living life with our families, making holiday plans, snapping Instagram pics and sleeping in our warm beds at night — some people are living in hell right under our noses.

We see them, although most of us choose to turn and look away.

Mario Jefferson lives in a tent in Houston’s Third Ward. He gave NewsFix a tour of his makeshift home, which is surrounded by trash and mosquitoes. As he swatted away the bugs, we swatted, while spending the afternoon with him along Highway 288.

He was frank about how he ended up on the streets.

“To tell you the truth, I got on drugs. You know, I needed help, but the city won’t help nobody,” he said.

To make it, Jefferson does odd jobs around the neighborhood. He admitted that he used to panhandle, until the city put an end to that.

“If I hold a sign on the street, then the police will come and make you leave so what is a homeless person to do?” he asked.

Jefferson said, while panhandling may be what some consider as bothersome, it should not be illegal. He claims the police are constantly threatening to haul homeless people off to jail.

“Why you gotta come and curse me out saying ‘get the hell our of here or else you go to jail?'” he said.

Jefferson says, however, it’s not as easy as they make it seem.

“He might got these shelters for single people, and might let you stay one day, but then they kick you out,” he said.

He faces other roadblocks as well.

“I understand them saying ‘get a job,’ but I am 60 years old. How in the hell? Everybody is not just going to hire 60-year-old people,” Jefferson said. “I wanted to go get my food stamps but you got to have an ID, I don’t have my ID.”

Just like he did for NewsFix, Jefferson is extending an invitation to the mayor to come join him on the streets.

“If he come for a while and sit with people, stay a couple of days, hell. Get his security to stay with him and he’ll know what it feels like,” Jefferson said.

In the end, Jefferson feels hopeless.

“I feel invisible. Like nobody don’t give a damn,” he said.

We see you Mario …. and we’re praying for everyone out there with you.