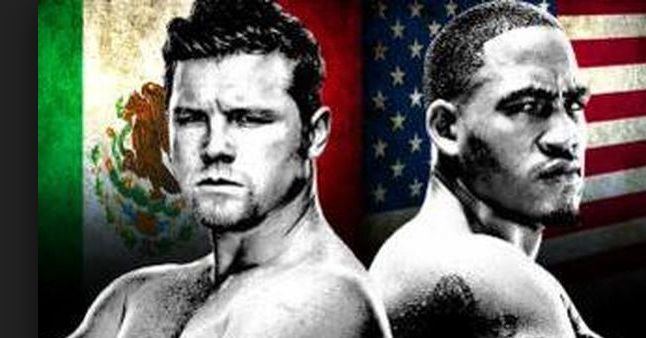 HOUSTON, — The wait is over. Two of boxing’s toughest warriors, Mexican superstar Canelo Alvarez and the Texas titan James “Mandingo Warrior” Kirkland will clash in a 12-round super welterweight showdown at Minute Maid Park in Houston, Texas on Saturday, May 9.

Golden Boy Promotions, in association with Canelo Promotions, SMS Promotions and Leija*Battah Promotions will bring fans an explosive night of boxing when these two exciting warriors finally meet in this much-anticipated matchup. It was a packed house in Minute Maid Park as the boxers and promoters made the announcement.

“I’m very happy that my upcoming fight with James Kirkland will air on HBO; it will be exciting, explosive and should not be missed,” said Alvarez. “Kirkland is a dangerous fighter who is coming prepared for a tough night and this fight, without a doubt, will be one to remember. I promise my fans I will be victorious and invite everyone to come out and join us at Minute Maid Park on May 9. They will not be disappointed.”

“This is the fight I’ve been waiting for,” said Kirkland. “Canelo is the opponent I get asked about more than any other fighter. I’m ready to show my skills to the world and shut down the people who doubt me. Come fight night you will see a great fight between two warriors and I know at the end of the night my hand will be raised in victory.” It was a packed house in Minute Maid Park as the boxers and promoters made the announcement.

Canelo Alvarez vs. James Kirkland, is a 12-round super welterweight bout presented by Golden Boy Promotions in association with Canelo Promotions, SMS Promotions and Leija*Battah Promotions and is sponsored by Corona Extra. The HBO World Championship Boxing telecast begins at 9:00 p.m. ET/PT.

“We are committed to putting on the best fights and a fight between Canelo, who is one of the best fighters in the sport and Kirkland, who is one of the most feared, will be an explosive night in the ring on May 9,” said Oscar De La Hoya, Founder and President of Golden Boy Promotions. “Canelo is ready to take on Kirkland and he is prepared to give fans an entertaining fight.  Fans from all over the country will come to Houston’s Minute Maid Park to see a tough, exciting and epic brawl.”

“I’m excited about this match up. James Kirkland and Canelo Alvarez represent two of the best fighters in the sport,” said Curtis “50 Cent” Jackson, Chairman and CEO of SMS Promotions. “They both have impressive knock out records and similar fighting styles. Their determination and intense preparation will make for a top fight. Whether you’re with us in person or tuned in on HBO, I know this will be a fight not to be missed.”

On Tuesday morning, 50 Cent told KBXX 97.9 the Box Houston that he guarantees a win, a rematch then a fight with Floyd Mayweather.  He also mentioned it was the 10-yearanniversary of “The Massacre” and a six-song EP has been released in recognition of the milestone

“Because of the quality of fighter he is and quality of fight he is in, Canelo Alvarez’s 2015 debut may be more heavily anticipated than any others,” said Peter Nelson, HBO Sports vice president of programming. “That’s because when Canelo decided to face the incarnate wrecking-ball that is James Kirkland, fans recognize both that Alvarez is choosing a hard road and that Kirkland has been paving that road his whole career in hope of one day reaching a landmark opportunity like this one. Alvarez-Kirkland is a signature World Championship Boxing event.”

“We are very excited to host the first boxing match ever held at Minute Maid Park,” said Astros President of Business Operations Reid Ryan. “Houston has seen some of the greatest boxers of all time, Muhammad Ali, George Foreman, Joe Frazier—and we look forward to having our ballpark and our fans be a part of that legacy.” At the age of 24, Guadalajara, Jalisco, Mexico’s Canelo Alvarez (44-1-1, 31 KOs) has conquered the boxing world, captivating fans both at home and around the globe with his action-packed fighting style, charisma and willingness to take on the toughest challenges. The former WBC and WBA Super Welterweight World Champion, has fought and beat the best including Carlos “Tata” Baldomir, Kermit “The Killer” Cintron, Sugar Shane Mosley, Austin “No Doub” Trout, Alfredo “Perro” Angulo and Erislandy “The American Dream” Lara. His only loss was his 2013 record-setting ‘highest grossing bout of all time’ fight with Floyd Mayweather. On May 9, Alvarez will put it all on the line once more against perhaps the hardest puncher in boxing, James “Mandingo Warrior” Kirkland.

A Texas titan, representing the city of Austin, 30-year-old southpaw James “Mandingo Warrior” Kirkland (32-1, 28 KOs) has built his reputation with explosive power. His fists have accounted for 28 knockout victories over the course of his nearly 14-year professional career. A former NABO and WBC Continental Americas Champion, Kirkland bounced back from his lone defeat against Nobuhiro Ishida in 2011 with five consecutive wins, four coming by way of knockout. Kirkland has defeated Brian Vera, Alfredo “Perro” Angulo and Carlos “King” Molina and most recently handed Glen “Jersey Boy” Tapia his first professional loss by way of a punishing sixth-round technical knockout, setting the stage for a war with Canelo on May 9.