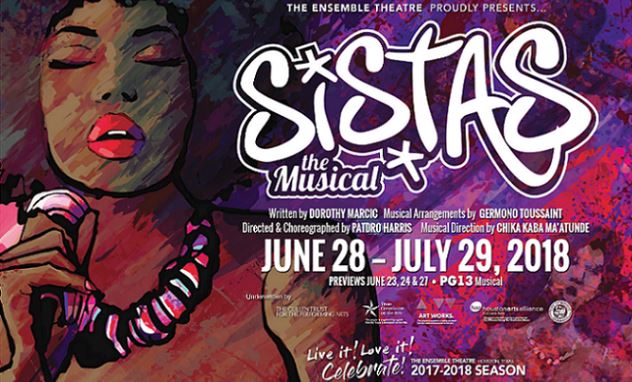 The Ensemble Theatre gears up for season finale of “Sistas: The Musical”

HOUSTON — Get out and enjoy a great night of entertainment with the family! The Ensemble Theatre is gearing up for its season finale of Sistas: The Musical by Dorothy Marcic, musical arrangements by Germono Toussaint, directed and choreographed by Patdro Harris, and musical direction by Chika Kaba Ma’atunde.

The story is centered around a group of friends who come together following the loss of a family matriarch. They must choose one song to sing at her memorial that night. These five friends find solace in their sisterly bond and take a musical and historical journey through the songs that were anthems marking social change, and that resonated with the thoughts and emotions of women all over the world.

Sistas: The Musical features an all-female cast accompanied by a live band off stage. The music’s trajectory goes from “Naming the Pain” (A Good Man is Hard to Find) to “Framing the Problem” (I am Not My Hair), to “Proclaiming the Joy” (Just Fine and Golden). This play parallels the story of African-American women and their emerging sense of empowerment.

The Ensemble Theatre’s 2017-2018 Season is sponsored in part by grants from the City of Houston through the Houston Arts Alliance, Texas Commission on the Arts, and the National Endowment for the Arts. United Airlines is the official airline sponsor for The Ensemble Theatre. Sistas: The Musical is generously supported by The Cullen Trust for the Performing Arts.

The Ensemble Theatre was founded in 1976 by the late George Hawkins to preserve African American artistic expression and to enlighten, entertain, and enrich a diverse community. Forty-one years later, the theatre has evolved from a touring company operating from the trunk of Mr. Hawkins’ car to being one of Houston’s finest historical cultural institutions.