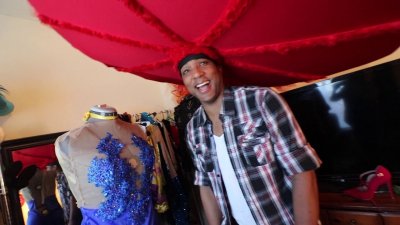 HOUSTON — Dazzling the audience with elaborate costumes and accessories has become an increasingly crucial element in drag performance. While elongated silhouettes and feminine delicateness is appreciated, recent trends encourage bolder and often larger-than-life designs. The most popular opinion is that bodies must be SNATCHED, faces must be BEAT and the look must be MURDEROUS!

And when looking for someone to help you “kill” the stage, many seek the help of Damon Demond, who calls himself the “one-stop-shop.”

Demond is one of the most in-demand clothing designers in Houston’s drag community, and his creations turn queens’ dreams into reality, whether they are looking for a gown, accessories or a stop-you-dead-in-your-tracks headpiece.

“I go by one-stop-shop because everything is here,” Demond said while sitting in his home surrounded by fabric and detailings. “I’ve been doing this for about 15 years. I started off actually stripping, but I took that to another level. Then I found out I could make clothes, and the money started rolling in.”

His career in clothing design started after a friend offered to show Demond how to cut out the bottom of a dress. Designers and stylists help queens not only achieve the vision of their personas, but also the most appropriate fit for their body-type and performance needs.

“If you walk in a store, you can walk in and get any dress of the rack,” Demond said. “You have to get it tailored or something not made to your body. Me personally, I like to make it to my fit, my form and my action.”

Demond listens to the concept, thinks about the song, and then he just runs with his thoughts. His latest creation for Alexye’us Paris? Fringe chaps! He said it takes him less than a day to complete an idea after he picks up the needle and thread.

“I can’t draw. I can’t sew with a pattern, I just know how to sew,” Demond said. “My mom has always told me that I have a talent. I just close my eyes and keep on cutting.”

Drag queens come from near and far for his clothing designs, but Demond said, in his opinion, what takes an outfit to the next level is an amazing hat. He makes those, too.

“When you see me, you will always see a hat,” Demond said. “Every dress, every costume I own always has a hat. I don’t like a lot of hair— hair is hot. So instead of wearing all that big hair, just put on a hat! Oh baby, I turn it out!”

Big, bold and bodacious, one hat in particular reflects the outrageousness of modern drag fashion: the legendary red hat.

“When I first made the red hat, I did an opening with some of my sisters, it was ‘Say Something Hat Day,'” Demond said. “Everything we do with drag is always big. I had some old installation to a house used as a prop, so I cut a big old circle out of it and said ‘this will work’ and decorated it.”

Drag: a performance art form, a career, a culture and above all a lifestyle. And like all things in human life, drag changes with trends and generations. Some styles are accepted almost immediately, while others are harshly rejected and forced to fight for the spotlight.

But at the end of the day…

“Some people still have that hate for people when you’re different,” Demond said. “I am different, but I’m just a loving person and if everyone can get along and be loving, then it will be a better world. I just look over them; put my face on and keep on going.”