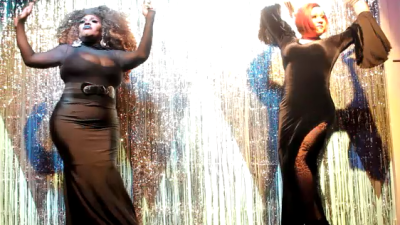 #Slay: ‘Death Drop’ with the Drag Gawds — it’s all about the performance

Let’s get that vocabulary together for this piece!

a slang term for “gods”

a type of dance when a dancer dramatically falls backwards into a struck pose on the ground, usually to end a dance

HOUSTON — We often harp on glitz and glitter when it comes to the infamous world of drag performance— the extravagant costumes, the bold wigs and impeccable self-made curvature. And yet, so much remains to be said about the moments leading up to that slow strut to center stage.

The CW39 Houston interviewed several professional queens in the Houston drag scene. No matter the queen’s level of experience, genre or background, the staples of a true queen quickly became apparent: confidence, desire and an infallible spirit of hustle.

Kardashion-Paris — known off stage as Kerry Jackson — has performed in the Houston drag community for a little over a year. A professional dancer for the Houston MET Ballet, he is formally trained in multiple dance forms. And his openness embodies the ambition of the millennial generation.

“Drag can actually be a promising career,” Kardashion-Paris said. “I plan on making a career out of drag. Not everybody plans on doing so though, but that’s not for everybody. I’ve only been doing this for only a year and a month. But I can tell you this: I’m going to be sickening.”

Drag shows and pageants can be found throughout the Houston area at bars, restaurants and other venues. It’s also common for queens to emcee events that may or may not be drag-related, such as bingo nights and various competitions. Kardashion-Paris has several talents, but naturally, her areas of expertise are dance and acrobatics— twirling through the air and sometimes flipping off stage!

“We shouldn’t be scared to show off our masculine and feminine side,” said Brice Cobb, who performs in the Houston drag scene as Vitamin B. “I guess, it’s the way you present yourself— all the facial expressions, doing standup, song twist, the outfits, the faces, the makeup you do. It all depends on your aesthetic and how you present yourself to a crowd. Attitude; it’s always about attitude.”

[Bonus video: Spending a day with Brice “Vitamin B” Cobb]

Vitamin B, who pulls his inspiration from the strong women in his life, started to pursue drag about a month ago. He said it started off as a hobby, but overtime, it became more.

“We’re here to have fun and entertain, and people love to be entertained,” Cobb said. “We’re just playing a character.”

Of course, what’s a drag performance without the famous lip-syncing and voguing? The art of voguing, which consists of exaggerated modeling poses turned into dance moves, was first performed by the black drag queens of Harlem in the ’60s. The style was inspired by the covers of Vogue magazine and influenced by ancient Egyptian art and hieroglyphs. Lip-syncing also has a deep history in drag and ranges from energetic duets to soulful solo ballads.

“You get on the stage, honey. We cry on stage,” Kardashion-Paris said. “I dance my heart out if I’m in my feelings and things of that nature.”

The uglier side of drag is pouring blood, sweat and tears into a career that can, at times, be overwhelmed by personal, emotional and financial struggle— as it is for most upcoming artists and performers — and even harsher for members of the LGBT community. It is on the shoulders of the more mature queens to provide the newcomers with support and guidance, especially when it comes to lessons in life, career and how to WERK IT!

Lonnie Rodgers is a hair stylist by day, but when the sun sets, she transforms into celebrity impersonator, Lana Blake. Elegant and experienced, Blake has found success in drag since the early ’90s. She has taken the stage in various personas over the years including Cher, Cyndi Lauper, Christina Aguilera, Joan Crawford and her first-love, Madonna.

“I was going to what I guess you call all the circuit parties— the white parties, leather parties, whatever. And all of them, I ended up going to as Madonna,” Blake said. “I was obsessed with Madonna for some reason. One Halloween, my mom helped me make the black and white holiday polka dot outfit from her first, big tour, ‘Blonde Ambition.’ It just kind of sparked from there.”

Blake said her drag identity was born after a friend invited her to join their show in Galveston, but since then, the scene has changed dramatically.

We'll be exploring the LIMELIGHT, the LOOKS and the LIVES within Houston's #drag scene — sippin' tea with the best and most talented! #Slay: Exploring Houston's Drag Community VISIT CW39.COM FOR NEW FEATURES EVERY THURSDAY IN MAY! Keep up…if you can ??? #dragqueen #style #glam #ootd #mua #makeup #inspo #killinit #dressup

“It’s completely different now,” Blake said. “Drag was more organic [then]. You really kind of threw something together and made it look elaborate. And you really had to entertain the crowd with your talent and not your costumes. And now it’s basically completely the opposite. You have big elaborate costumes— the entertainment value is already there because of your characterization, which I pride myself on, the talent has become secondary.”

Vitamin B gives props where they are due, and is excited to help carry the fabulous torch.

“I think the older queens appreciate us for bringing it this far. We have to respect them for making that line of pavement for us because if there isn’t that line of respect— then [the change] would be negative,” Vitamin B said.

SO what about that Death Drop? Kerry Ultimate-Phoenix Jackson gave us a little tutorial on how it’s done. Check it out!