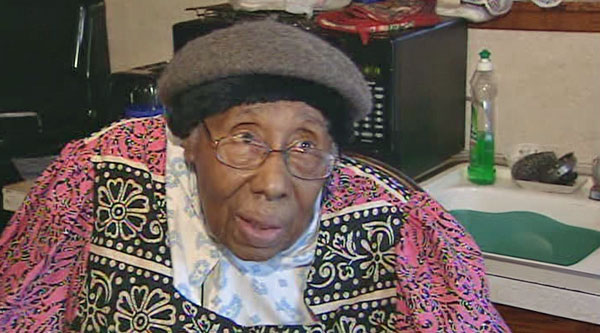 HOUSTON—A 95-year-old woman was not harmed early Thursday when an 18-wheeler came crashing into her yard, just a few feet away from the bedroom she was sleeping in. She credits her good fortune to her faith in the good Lord and an old oak tree she planted five decades ago.

A blue Freightliner tractor trailer was traveling in the 5000 block of the North Loop East around 5 a.m. when the 64-year-old truck driver suffered a heart attack, according to Houston police.

The truck veered off the freeway, through a ditch and crashed at a home in the 5500 block of Lavender.

The truck hit a Live Oak tree in Alice Wright’s front yard, directly in front of her bedroom. The elderly woman was sound asleep and did not hear a thing.

“Well, I didn’t wake up until my grandson woke me up and told me that the truck was in the yard,” Wright said. “Well, no, my neighbor across the street called me and said, ‘Are you all right,’ and I said, ‘What’s the matter,’ and she said, ‘Oh, Mrs. Wright you don’t know that truck is in your yard and could have come in your house?’”

Wright then crawled out of the bed and was shocked at what was sitting right outside her bedroom window.

The huge truck that crashed in her front yard could possibly have plowed through her bedroom, had it not been for the mighty oak tree she planted so many years ago.

“I got that tree out of the thickets up there in Cleveland, Texas, when I was going to Cold Springs. Me and my niece went out there and dug them – she got one and I got one – they were little bitty saplings then,” explained Wright. “That was back in the early 60s when we got those trees.”

The “little sapling” that grew to protect Mrs. Wright was just as strong as her faith.

“I’m just so thankful to the good Lord it was there, to stop that truck, I tell ya,” Wright said with a smile. “I’m blessed, so thankful, like I said I ask the Lord every night to shield me from hurt, harm and danger. He puts hands around this old house, and that’s what he does,” she said.

The driver of the 18-wheeler was taken to the hospital, where he was pronounced dead.  His identity is pending verification by the Harris County Institute of Forensic Sciences.

Click here to see the RAW interview with Mrs. Wright on KHOU.com.