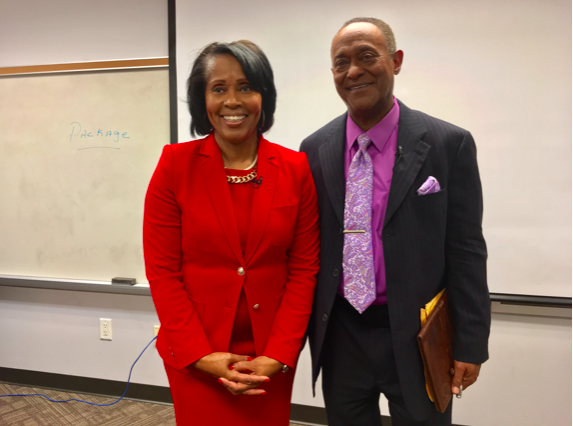 Long time news veteran Jose Grinan and Texas Southern journalism professor Serbino Sandifer-Walker united to shed light on one of the most prolific storytellers of our time.

Grinan gave journalism students at Texas Southern University a pleasant surprise recently when he stopped by Sandifer-Walker’s journalism class. The mission was to honor the late George McElroy, who was also affectionately known as “Mr. Mac.”

“I’m here to talk to her about someone that touched her life that none of you know,” Grinan said.

Grinan said that McElroy influenced his career to the greatest degree, and since it is Black History Month, he saw it as the perfect opportunity to pay homage. Sandifer-Walker was the ideal contact to get insight from, considering the fact that she was a former student of his back in the ’80s.

“Rather than talk about all these other folks that you can read about in books, I wanted to do somebody that no one knew, but touched a lot of people in this community,” Grinan continued.

McElroy was the first African American man to graduate with his masters degree from the nation’s first journalism school at the University of Missouri. McElroy had applied to The University of Texas, but was denied admissions because blacks were not allowed to attend such institutions at that time.

Among many “firsts,” he was also the first black man to teach journalism at the University of Houston with a long list of other things. In his early career, he started out at  the age of 16 working as a writer for The Informer, the oldest African American newspaper in Texas. While there, he made $3 per column and functioned in virtually every capacity of running the periodical. He spent 58 years with the newspaper off and on before retiring in 1996.

“When you think of journalism excellence, George McElroy’s name is synonymous with excellence. He is the Barbara Jordan of journalism,” said Sandifer-Walker.

Outside of his journalism career, McElroy also taught for over four decades. Some of the schools and intuitions included Phyllis Wheatley in Fifth Ward, Jack Yates High School in Third Ward, and its neighboring institution, Texas Southern University.

McElroy was a pioneer in more ways than one, growing up in the era of segregation motivated him to break those barriers despite the challenges he faced as a black man. He was more than a journalist;  he was a writer, historian, humanitarian and a monumental force in the progression of Houston’s civil rights issues.

McElroy impacted the lives of so many people, with a resilient attitude that sends the message that you can overcome anything, no matter the circumstance. His tenacity, talent and strengths have paved the way for many African American people in the Houston community.