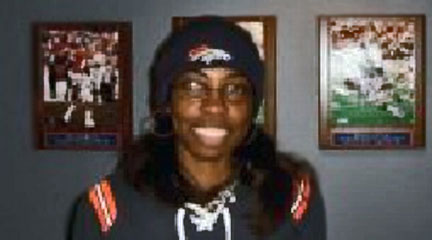 Her family told KKTV she had been stabbed to death and her body was found unclothed, but the army has been tight-lipped on details surrounding the murder.

No suspects have been arrested, but investigators said they don’t believe anyone else is in danger.

Fonteneaux was ranked as a specialist and had been in the Army two years. She was also a food service specialist in the 4th Engineer Battalion.

The beautiful young woman graduated from TSU with a degree in kinesiology on May 16, 2009.  She was also a member of the track team at the university.

“This is absolutely heartbreaking my baby sister life has been taking by one of you COWARDS I rebuke you in the name of Jesus just kno her life was surrounded by wonderful people who luved her dearly ANGEL UPABOVE PROTECT US WITH YOUR BEAUTIFUL WHITE WINGS,” her sister Nkenge Fonteneux said in a Facebook post linked to an article about the homicide.

Following that, friends and family members lit up the social network expressing their sorrow.

“My condolences for your family lost Nkenge, Brandy was a great person, met her while we were matriculating through Texas Southern,” fellow TSU graduate H. Shelton replied.

“RIP B NKenge u n ur fam r in my prayers,” another person commented.

Her brother, Brad Fonteneaux, posted a photo on his MYSpace page years ago singing his little sister’s praises after she graduated.

“me and my lil sis brandy thats my heart shes on her way to the army just graduated from tsu do your thang boo,” the caption read.

As the author of this article, I also send my prayers to this family.  I, too, graduated from Texas Southern University on May 16, 2009.  Even though I did not Brandy, I was with her in spirit as we collectively celebrated our accomplishments and took those long-awaited walks across the stage.  Her life has definitely ended too soon.  RIP you beautiful, black, smart, accomplished young woman.

We pray for justice.

***(The photos used in this article were found as public images on the internet.  They were available on profiles from Facebook and Myspace)***