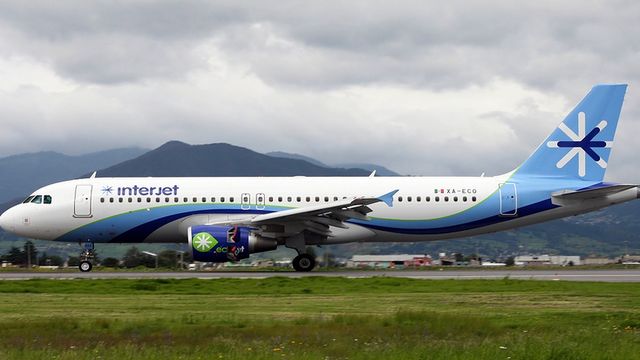 Interjet officially began flight operations in Houston, Texas Thursday as the airline celebrated the landing of its inaugural flight connecting Houston’s George Bush Intercontinental Airport (IAH) and Monterrey International Airport (MTY) in Monterrey, Mexico
The airline will now offer passengers a choice between two daily flights Monday through Friday and one daily flight on Saturdays and Sundays.  The inaugural flight from Monterrey arrived in Houston at 7:55 a.m. to the traditional water cannon salute and a welcome celebration featuring dozens of well-wishers.

“With these new flights, Interjet strengthens its international presence by connecting two of the most important cities in terms of international business. Monterrey and Houston are key destinations to the expansion of our airline and passengers can enjoy all the benefits they will receive flying with us,” said Interjet CEO Jose Luis Garza.

Houston and Monterrey already share significant business and cultural ties with one another, and those connections are definitely expected to strengthen with the arrival of new nonstop flight service.   Houston is well known as the “Energy Capital of the World” and Monterrey is widely recognized as one of Mexico’s main centers of business.

“Houston already enjoys greater connectivity with Mexico than any other country in the United States and that bond is going to be even stronger with the arrival of Interjet,” Mayor Parker said.  “The City of Monterrey is extremely important to the Houston region for both economic and cultural reasons and this new nonstop flight makes it easier for our residents to strengthen business ties and maintain close connections with family and friends.”

The arrival of Interjet is the latest example of an unprecedented level of growth for international air travel in Houston.  George Bush Intercontinental Airport is currently on pace to see more than 10 million international passengers in 2014, a number never  reached in the facility’s 45 year history.

Interjet looks to tap into this growing market by offering passengers a new option to one of Mexico’s most popular destinations.  Depending upon demand, the airline will feature service aboard its 150-seat A-320 and its 93-seat Superjet 100 aircraft, with passengers departing from the Mickey Leland International Terminal (Terminal D) at IAH.

“Houston passengers continue to enjoy the benefits that inherently come with increased competition and that’s especially true for passengers boarding international flights,” said Houston Aviation Director Mario C. Diaz. “The Interjet team understands and embraces the competitive nature of the airline industry and we welcome them as a member of the family of air carriers at George Bush Intercontinental Airport.”

Interjet’s daily service will include service twice a day Monday through Friday, and once a day on Saturday and Sunday.

With its fleet of 150-seat Airbus A320s and 93-seat Superjet 100s, Interjet serves 47 destinations covering the top business and leisure locations in Mexico, and its international service now reaches Houston and San Antonio (SAT) in Texas, and New York (JFK), Las Vegas (LAS) and Miami (MIA) in the rest of the United States, as well as Guatemala, Costa Rica, Havana and Bogotá in Central and South America.