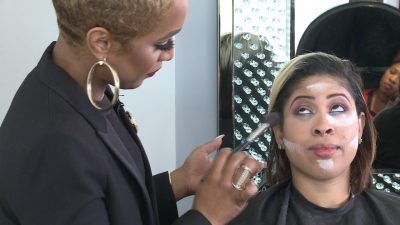 By: Nakia Cooper and Devan Lutz, originally posted on CW39.com.

HOUSTON — The beauties behind a bold look that is sweeping the nation are not exactly who — or what — you think. Nobody does drag better than the “Queens” — Drag Queens, that is.

For years, female impersonators have been emulating women — to perfection we may add. But now, the tables have turned.

Now, women want to master the makeup techniques of the drag divas, and no one #SLAYS better than Alexye’us Paris, a headliner in the Houston drag community.

It takes about 90 minutes for Demarcus to transform into Alexye’us.

And if you want your face “beat’ like a queen, H-Town’s super duo makeup artists Stephen “ColeColors” Coleman and Brandi Holmes can show you how to get the look.

“Their artistry is on a whole other level, a whole other skill set. And to be able to create those dimensions and lines and sometimes look better than a lot of these natural-born women is amazing,” Holmes said.

Mr. “ColeColors” had one thing to clear up.

And that — is a compliment — in the eyes of the makeup Gods.

A lot of effort goes into looking fabulous, so to all the ladies and queens out there, in the words of RuPaul — “You better werk!”

[Brandi Holmes gave NewsFix a special makeup tutorial with typical “Dos and Dont’s” in the “Art of the Slay” Check out bonus footage of what she has to say.]

[To schedule an appointment with Steven Coleman and/or Brandi Holmes, visit them at “The Studio” located at 6343 Skyline Drive // Houston, TX 77057, and click the link on their names to connect with them on Facebook.]