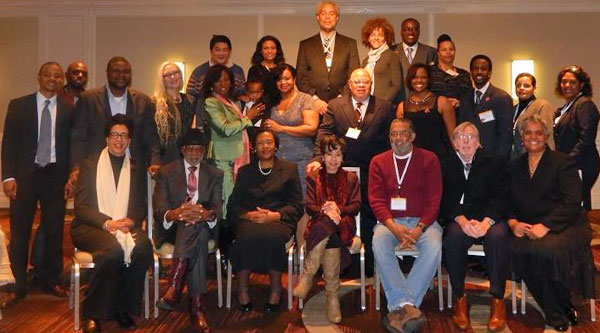 Texas Southern University’s Thurgood Marshall School of Law (TMSL) has been granted membership into the American Association of Law Schools (AALS). The association’s Executive Committee and House of Representatives voted to approve TMSL’s membership at the AALS annual meeting in New York, NY, January 3, 2014. The room was filled with cheer from other member school representatives and over 15 TMSL faculty and staff after the vote was accepted and Dean Holley delivered a riveting acceptance speech. TMSL hosted a “Texas in New York” Reception immediately following the meeting at the Sheraton, New York.

TMSL endured a very arduous review which ultimately resulted in the Executive Committee’s recognition of our “historic mission of preparing a diverse group of students for leadership roles in the legal community, business, and government.” The Executive Committee further stated that “(TMSL) consistently rates as one of the most, if not the most, diverse law schools in the nation.” The Executive Committee recognized the significant increase in bar passage rate as a result of our advanced academic support program and assessment department. They also commented on the increased “quality and quantity of our faculty scholarship.”

The purpose of the AALS is “the improvement of the legal profession through legal education.” This goal is accomplished in a number of ways, including professional development programs for law professors and administrators, a complement of over 90 sections organized by faculty and senior administrators, and a membership process that is designed to further the core values of the Association. The Association and university share the core values of the simultaneous pursuit of Excellence and Equality. Membership means that TMSL faculty can play an even more prominent national role in the academy, and that our students will become eligible for the Order of The Coif.

The TMSL family is extremely proud of this prestigious accomplishment and further shares the congratulatory expressions we received from other colleagues in the legal academy below. To all of our alumni, students, faculty and staff, this is yet another reason for you to be proud of TSU!