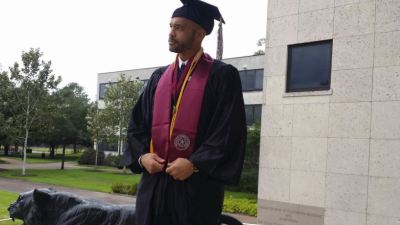 HOUSTON — Saturday, Dec. 10, 2016, is certainly a day Ren Moore will always remember. He walked across a stage, shook the hands of Texas Southern University president Dr. Austin Lane and Dr. Reza Poudeh, was handed his degree to an applause of fan fare and well wishes, and became a college graduate. What is even more amazing, he was the top graduate in his class.

“I didn’t ever think I would go to college, much less be the valedictorian,” he said.

It was one day many, including himself, would never have imagined. Especially not judging from where he was just a few years before.

In 2013, Moore was released from prison after serving a 20-year sentence for murder. He entered the Texas prison system at the age of 18 after shooting and killing a man. It wasn’t his first time being locked up. He was a troubled youth– brash — with a hot temper.

“When I was younger I was in vanguard school, however, by the time I got to high school I was running the streets and selling drugs,” he said. “I ended up dropping out of school and wound up going to juvenile detention and TYC state school in Crockett. Got out of there and wound up going to jail. Eventually in 1993, I ended up shooting a man over a bad drug deal.”

It is something, Moore says, he will always regret.

“I have a lot of remorse for that. I really feel bad for taking his life and hurting his family. If it is one thing in my life that I can take back, it would be that,” he said.

While Moore can’t change the past, he decided to live the remainder of his life making sure he didn’t repeat the negative actions. He used his time in prison to begin moving forward in a positive way.

“When I first got locked up, I was doing things that young men do in prison; playing dominoes and watching television to pass the time,” Moore said, but his hot temper still hadn’t changed, which led to a violent altercation with correction officers. He had finally had enough, and realized his brain was where he would find his true strength.

“I started to think about what I needed to do in order to change my life so that I would not continue to get into trouble and also get out of prison,” Moore said. “If I continued to fight with my bare hands, they would have probably beat me to death.”

Moore got his Associate Degree while behind bars, but when he was set free, finding work was tough and finding a permanent home was even tougher.

“I stayed in the Star of Hope a few days, stayed in the Salvation Army maybe one night, and some nights I slept at the Metro Rail station. Another night I slept under the Pierce Elevated bridge right behind St. John’s United Methodist Church,” he said.

Moore’s mother eventually encouraged him to enroll in school.

Diagnosed with depression, Moore was able to enroll at TSU, which accommodates students protected by the Americans with Disabilities Act.

“Our office is there to provide access to students with disabilities so that they can have the same opportunity as anyone else to succeed academically. Our main goal is to move toward inclusion so that everyone is on the same level of playing field as everyone else,” said Kaya Pickens, programming assistant, Office of Disability Services.

Moore said adjusting to college life was a different world.

“It was tough, I wasn’t used to being on a campus. Being here around so many young people who were from different backgrounds and had different experiences from my own, I felt out of place the first semester,” Moore said. “But throughout the time, there was always someone who I could talk to and show me what I didn’t know how to do. I didn’t receive any type of discrimination here, I received more encouragement and support here. It was overwhelming.”

“We saw Ren kind of walking around in the area. He came by the church and he was looking for some housing. If you don’t know, Temenos CDC is one of the premiere housing authorities for individuals who are homeless, and at times, we house people that most other people won’t house,” Queen said. “I thought about it, and most people would have denied him but I said, “OK, yeah, let’s show him some love and we gave him a key to his own home.”

A grateful Moore volunteered at the place when it was understaffed, and Queen decided to give Moore another opportunity — a job. And after seeing his hard work and dedication, he gave him another boost — a raise.

Moore is currently the lead resident assistant at Temenos CDC, supervising a crew of 10 at the Knowles-Temenos Place II apartments.

“We’ve learned that in the right environment, a great heart can actually feed the masses and when we hired him, the professionalism, the way he interacts with the residents has been so remarkable. He moved from a resident assistant to a resident lead,” Queen said. “He’s doing a wonderful job in, not only serving the needs of our residents, but being a beacon of hope in the midst of residents who have gone through the very same thing that he went through.”

Determined to give back, Moore is on a mission to help others.

“One of the things I learned in prison was to stop antagonizing people, to stop being so pessimistic and to stop automatically feeling like people are judging me or are against me,” Moore said. “I can do my best and live my life right now and prevent others from making the same mistakes I made.”

At TSU, Moore discovered he had a hidden talent — acting, and received praise for his role in a play produced by Dr. Thomas Meloncon, a TSU professor and award-winning, highly-acclaimed playwright.

Moore graduated with a BA in radio/ television and film with a minor in theater, and while rapping and acting are his two passions, he wants to also work in the fields of juvenile crime prevention and criminal justice reform.

“I believe that the system could be structured better so that it benefits those who are incarcerated as well as the communities they return to when they get out,” he said.

But on the top of his list, is helping his 71-year-old father.

“I need to find a place for my father. My father recently fell on hard times, he was involved in a car accident. Right now he’s staying with a friend, but that friend has to move by the first of the year,” Moore said. “I am going to have to withhold some of these other projects until I can find my father some place to live.”

Moore has advice for fathers of young men.

“Encourage your sons, don’t put them down and never turn your backs on them despite the mistakes that they make. Sometimes when the people who you are closest to you give up on you, people have a tendency to give up on themselves,” he said. “Don’t let your sons give up. Don’t let them lose hope.”