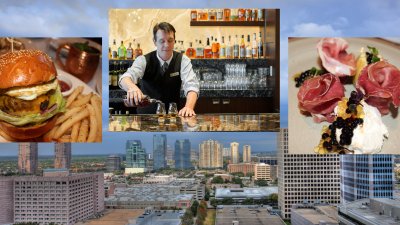 Fall in love with Houston: Enjoy “Uptown Staycation” and know where to find the flavor

HOUSTON — After the election and holidays with in-laws, we know it will be the perfect time for a staycation! The holidays will already drain those pocketbooks and [designer] handbags, so we want to make it easy for you to get away, without going away.   No need to run away from home, get to know this great city of ours while finding yourself — and falling in love with the Bayou City — all over again.

Just because the summer is over, and fall is handing us over gently to winter, doesn’t mean the fun has to end. Summers are all about the family and the fall is all about the romance, so  pack a bag for a weekend, grab your best guy or gal — leave the kids with someone you trust — and head Uptown for a “staycation” right here in Houston! Also, with the upcoming Super Bowl, we want to give the “outsiders” an “inside” look at the best the city has to offer. From great food, to robust whiskey and shopping for days, Houston has enough to keep the spirits flying high while you take over the city, starting with our world famous Galleria area and Uptown District.

Set yourself up somewhere that can cover all the bases and check into the Royal Sonesta Houston hotel, one of the premier hotels in the city and state.  Rather than relying on heritage and overt Texas references, the Royal Sonesta is international and cosmopolitan chic, and flavored by the principles that make Houston a leader in energy, medicine and space exploration.

Situated perfectly near the Galleria, which offers a shopping experience like non-other, the hotel boasts 485 impeccable guestrooms, and offers multiple food and beverage outlets, 50,000 square feet of meeting and event venues, a rooftop swimming pool and a fitness center.

Visitors can enjoy the convenience of being in the heart of one of Houston’s most well-maintained and pedestrian-friendly neighborhoods with nearby leisure attractions such as Uptown Park, the 1,500-acre Memorial Park and Highland Village.   But that’s not all, for those looking to relax “in-house” there is “Launch,” a grab-and-go shop with a carefully curated selection of sundries, and “Axis,” a sleek bar and lounge serving small plates and “Liquid Art” specialty beverages. Get a little more “gussied up” and check out ARA, dining on Executive Chef Robert Graham’s menu. And for the ultimate experience, make reservations at Table one, which offers six to 10 guests a private Chef’s Table experience.

And if you’re looking to venture out for a little of the scenic life, just take a quick taxi ride or a stroll outside to explore other restaurants in the Uptown District.

We know there will be no shortage of barbecue and steak joints all over the place — this is Houston, you know — but here are our recommendations for places that you should check out when you want to please the palate with a cautiously addictive twist.

Named “Houston’s best Italian 2013” by the editors of the Houston Press, Tony Vallone’s Ciao Bello is “your neighborhood Italian restaurant,” a warm and friendly spot for brunch, lunch and dinner. All pastas are made in-house and the pizza is inspired by the sottile, thin-crust pizza found in Rome’s colorful Trastevere neighborhood. Widely considered Houston’s leading expert on Italian cuisine today, Vallone works closely with his kitchen staff to create Houston’s most authentic dining experience. The restaurant’s recent “Italian Regional Cuisine” dinner series is one of the city’s most popular culinary events each month.

And the restaurant does not lose any of its local flavor. Artwork by local artists adorn the restaurant and the “Southern hospitality” Houston is famous for shines through!

PESKA Seafood Culture is considered one of Houston’s best dining establishments for brunch or lunch, and from the atmosphere to the staff, we see why. The words of the day are FRESH and FLAVORFUL! With unique and classic preparations from coastal areas around the globe, Chef Omar Pereney brings the heart of the Mediterranean Sea, Spain and the Iberian Peninsula plus Mexico, Central and South America to the axis of The Galleria. While the culture and cuisine may vary from one region to another, what never changes is the celebration of freshness.

The service was impeccable, and our server for the night was Vitale, a student from overseas. When I tell you he is the epitome of service at its finest, and is the type of host that you will make you want to return to the establishment over and over again.

It would be an absolute sin for anyone to visit PESKA and not take advantage of the Alaskan King Crab, Oysters, or Tuna Poke, all highly-recommended by Vitale. And for those who are not in the mood for seafood — no worries — the pork belly and Filet Mignon are among dining favorites. Another favorite is the Miso Bacalao, which is made with nori sauce, bonito flakes and sishito peppers.

Whatever palate you are trying to please, PESKA satisfies to perfection!

Fine, French food front and center – there is no better way to explain Etoile cuisine et bar,  and one taste of the cuisine makes it easy to see how the restaurant has quickly become a star in the Houston culinary scene.

The critically-acclaimed restaurant – featuring Master Chef of France Philippe Verpiand’s authentic, accessible and unassuming French cuisine – opened in a farmhouse-inspired space in Uptown Park in October 2012. It has developed a legion of loyal fans, immediately striking a chord with Houston diners as a visionary restaurant with no pretention, fully focused on classical and seasonal French fare, carefully crafted wine and cocktail lists and excellent service in a simple, yet elegant setting.

And every self-respecting restaurant in Texas has to have a burger!  Étoile got the memo, and features favorites such as the 8 oz. House Ground Burger (melted gruyère, tomato confit) on the menu.

Six years after a series of backyard discussions between friends lead to the incorporation of Houston’s first legal whiskey distillery, Yellow Rose Distilling, which is just a short drive from the Houston Galleria.

Founded in 2010, Yellow Rose Distilling debuted the first legal distillery and tasting room in the Houston city limits in late 2014. The 10,000-square-foot facility has become a destination for whiskey enthusiasts with twice weekly tours and a myriad of special events, plus a popular spot for locals and visitors from around the country and the world to sip and socialize over a menu of seasonally changing Yellow Rose craft cocktails. Featuring a 600-gallon mash ton, four 600-gallon fermenters, plus a 600-gallon whiskey still and vodka column, current production capabilities are over 20,000 cases per year.

Since Yellow Rose’s 2010 founding, each two years have marked a significant milestone in the company’s growth. Outlaw Bourbon officially debuted in Texas in 2012, and in 2014 Yellow Rose opened a 10,000 square foot production facility and tasting room in the Spring Branch area of Houston.

In addition to its award-winning Bourbon, Rye and Blended whiskeys, Yellow Rose is debuting three new products this fall:

LAST BUT NOT LEAST – SHOP….. the Galleria awaits you!