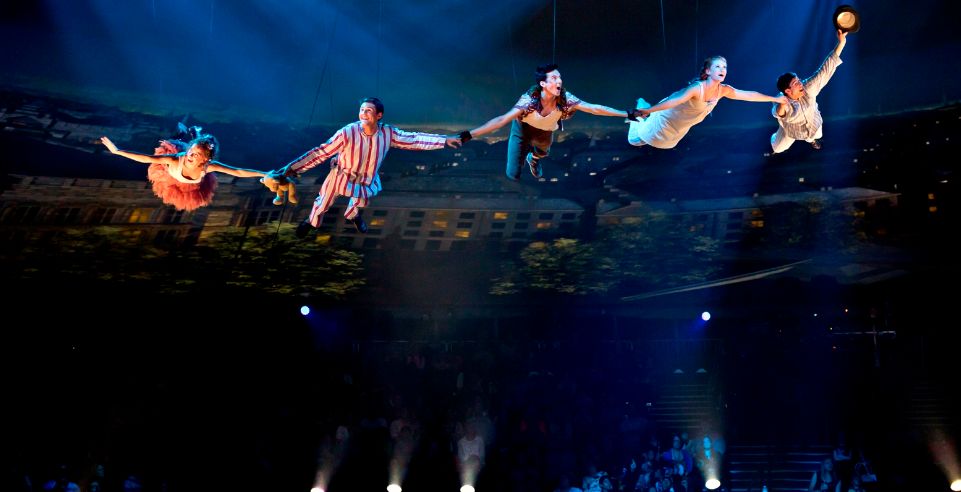 This remarkable production takes place in the one-of-a-kind Threesixty Theatre, a state of the art 100-foot high structure that is part tent and part luxurious world-class theatre.  Conceived by an award winning creative team, the beloved family tale will capture the imagination of adults and children alike. PETER PAN is presented in the striking setting of the Threesixty Theatre in partnership with the Society of Performing Arts and brought to you locally by The Houston Chronicle.  The 1,500-seat luxurious theater structure will be erected on the Houston Chronicle’s property at 4747 Southwest Freeway in the southeast corner of U.S. 59 South and Loop 610.

The show is performed up in the air, “in the round” and all around, creating a truly unique environmental theatrical experience. The entire interior is lit with over 15,000 square feet of Hi Resolution projection so that both cast and audience are immersed in a virtual Neverland.  When Peter and Wendy fly to Neverland, audience members will feel the effect in the pit of their stomachs as they fly with the beloved characters over 200 square miles of virtual London and beyond. This remarkable and beautiful production premiered in London’s Kensington Gardens, the original home of Peter Pan.  Seen by over 750,000 theatre-goers worldwide to date, PETER PAN, The Boy Who Wouldn’t Grow Up, was created by Scottish novelist and playwright J.M. Barrie.  One night, Peter flies into the London nursery of the Darling children, Wendy, John and Michael, teaches them to fly and leads them to the magical Neverland, “second to the right and straight on till morning,” where they live with Tinker Bell, the Lost Boys and meet the notorious Captain Hook. The tale of PETER PAN has been adapted many times including the Walt Disney animated film, a Broadway musical and an Emmy Award winning TV special.  However, it was not until this production, presented by Threesixty Entertainment, that PETER PAN was performed in London’s Kensington Gardens, where Barrie was first inspired to create him and where the original statue of PETER PAN has stood since 1912.

By arrangement with Great Ormond Street Hospital Children’s Charity and Samuel French Limited, PETER PAN is produced by Norton Herrick and Charlie Burnell.  Norton Herrick, Chairman and CEO of Herrick Entertainment, is a multiple Tony Award® winning producer and film producer of Critics Choice Award winner Lone Survivor.  “This PETER PAN production,” noted Herrick, “is that rare opportunity to tell a legendary story with equal parts innovation and grandeur.  Audiences can sit back and be transported to a magical place and time, and be able to share it with their family.” Charlie Burnell, the London based founder of Threesixty Entertainment and originating producer of PETER PAN, said “Threesixty’s intention with PETER PAN has always been to remain faithful to the original story while employing 21st century techniques to tell it.  We are delighted to bring this all new production to North America and entertain a whole new audience of 5 to 95 year olds.”

Tickets for PETER PAN in the Threesixty Theatre, will be available to the general public beginning July 13.

Prices for weekday performances begin at $25.00 and weekends at $35.00.  Premium and VIP ticket packages will be available.

Tickets are available for purchase online at PeterPan360.com, or at The Society for the Performing Arts Box Office,  at any Ticketmaster location or by calling 1-800-745-3000.

Discounts are available for GROUPS of 10 or more by calling 713-632-8113 or emailing lena@spahouston.org.

For more information about PETER PAN in the Threesixty Theatre, please visit PeterPan360.com.

FAQ’s about PETER PAN in the Threesixty Theatre
•    12 projectors, delivering 360 degree projection
•    10 million pixels
•    15,000 square feet of CGI
•    400 square miles of virtual London were rendered
•    The largest surround CGI venue in the world
•    The world’s first fully 360 cinematic projection for live theatre performance
•    100 computers took 4 weeks to create the images – it would have taken 8 years for a single computer to render

“Will my children and grandchildren have fun watching Peter Pan in the Threesixty Theatre?  And the answer is YES, FOR SURE!”
The Washington Post, July 2, 2015

“Catch it this summer between trips to the pool, summer camp and vacation, because it is simply spectacular.”
Tech Savvy Mama, July 2, 2015