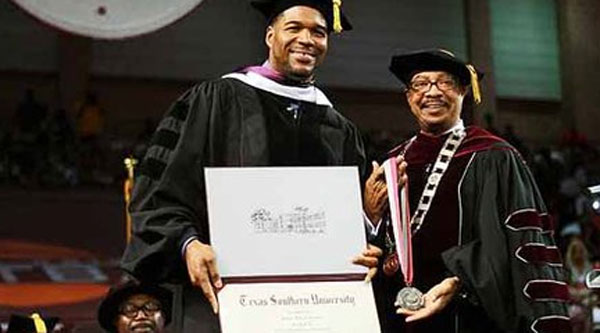 Michael Strahan’s induction into 2014 Football Hall of Fame is big for TSU, big for Houston

Editor’s note… This big lovable hunk is close to my heart because I, too, am a graduate of Texas Southern University and Westbury High School!!!!

Michael Strahan continues to make Texas Southern University proud. In addition to his titles of host of the NFL pregame show on Fox, co-host on ABC’s “Live with Kelly & Michael,” former NFL player and Super Bowl champion, Strahan can now add Pro Football Hall of Famer to the list. In the announcement made at Radio City Music Hall in New York, Strahan led the class of 2014 Hall of Fame inductees headed for enshrinement August 2 in Canton, Ohio.

After starring at Westbury High School, Texas Southern University was the only school that offered Strahan a scholarship to play football. Focus, determination and hard work propelled him to be drafted in 1993 by the New York Giants. He would spend the next 15 years carving out a hall of fame worthy career that included a Super Bowl championship, a Defensive Player of the Year award, seven Pro Bowls, and breaking the NFL single-season record with 22.5 sacks.

“We are extremely proud of Strahan’s induction into the Pro Football Hall of Fame,” said Dr. John Rudley, Texas Southern University president. “This honor is just further proof that ‘Excellence in Achievement’ is more than a mantra at Texas Southern, it is a way of life.”

Another Texas Southern alumnus Tony Wyllie, who currently holds the position of Senior Vice President of Communications for the Washington Redskins says, “I was prepared for this announcement because Mike is so deserving of the Hall. I wonder if the average person knows how huge this is… this is big for Mike and this is big for Texas Southern University students, alumni, friends, donors, supporters and huge for the city of Houston.”

Strahan remains intimately connected to his alma mater. He was conferred with an Honorary Doctorate of Humane Letters degree during the University’s spring 2013 commencement. He urged students to push themselves, believe in themselves, make the right decisions and to expect to be successful.

“I had one scholarship offer and that was to TSU,” Strahan said during his speech. “Thank God for that scholarship. I was not the biggest, fastest, strongest, or smartest football player, but I always understood that I had more heart than that guy lined up across from me. I had heart; you have heart; we have heart at this school.”

With stretched arms, Strahan concluded his remarks by proclaiming, “I’m Michael Strahan…and I am TSU.”