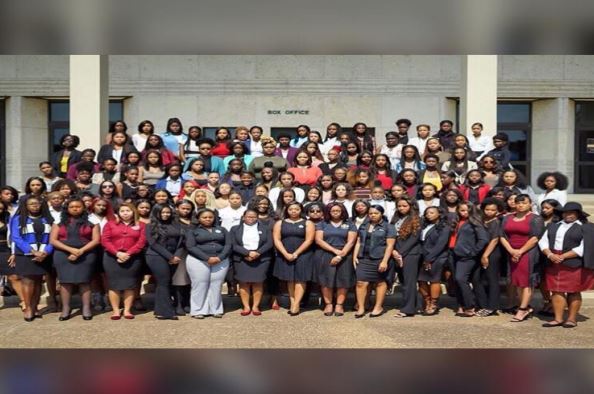 HOUSTON — The women of Texas Southern University dressed up in their suits and high heels to showcase unity and support the #100meninsuits movement, empowering women on campus, showing that “Black Girls Really do ROCK!”

In an effort to end stereotypes in the African American community, several HBCUs including Howard, Prairie View A & M and TSU have come together in a creative approach to protest in hopes of showcasing the power of young, educated African Americans.

“It allowed us to define all the stereotypes of black women and those who attend HBCUs,” said Jacquita Johnson, an organizer of the event.

“100 Women of Virtue,” which was organized by the school’s UPC, SGA and Royal Court to promote the beautiful women attending TSU.

Organizers also wanted to support the men’s efforts while sharing a sense of “girl power,” sticking together instead of trying to bring one another down.

“It’s really positive and helping us as women to grow and have confidence in ourselves,” said Faith Payhey.

Before the women strutted their stuff, the men of TSU assembled on the stairs of the Granville Sawyer auditorium to show support of the hundreds of men who have been brutally murdered or victimized by the justice system. They decided to get “suited up” and peacefully take a stand. The women wanted to echo the men’s movement.

“The motivation behind the photos was to support the men in the past events that
have been going on,” Johnson said.

Black women have been noted as the most educated amongst any other race, but still get viewed as being the complete opposite and sometimes worst.

“Miss TSU” Casandra Cantu said she wanted to shed light on the hard working women rather than the praised “Instagram model.”

We just want to be treated like the rest. YOU GO LADIES!