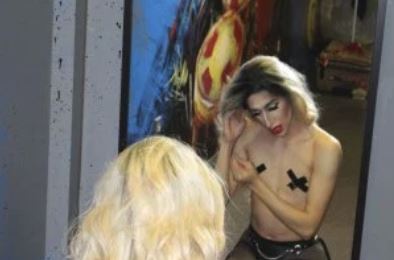 HOUSTON — It would take a million voices to describe the twists and turns of drag culture, but the definition of drag can be summed up in two words: art and freedom.

“Drag is just what you like to wear,” illusionist Angelina DM Trailz said. “It’s an extension of an expression— and you just get to have fun and wear whatever you want. Drag is fun— that’s what drag is.”

While some are still digesting drag culture’s presence within society, the art of men cross-dressing in front of audiences goes way, way back— to the great and powerful Greeks!

The Birth of Female Impersonation

In ancient Greece, women weren’t allowed to participate in the theatrical arts because they were seen as inferior creatures and unfit for the stage, one of society’s most lucrative art forms. So actors grabbed masks, sewed dresses, stitched wigs and tucked to perform the female roles themselves.

“Female impersonation is what paved the way for what we do now. It takes a lot of dedication and hard work, achieving that level of transformation where it is completely undetected.” — Dulce Strutts

But even back then, the female impersonators faced a lot of flack!

Great influencers — like Plato and Socrates — argued these actors degraded themselves by mimicking the simple emotions and characteristics of women. The sexism and prejudice continued into the Shakespeare Era when women were still banned from all professional disciplines, including theatre.

It wasn’t until the Restoration in 1660 that Charles II declared natural-born women would be allowed on stage. However, male actors continued to elevate the craft to near perfection.

“When you can look at a drag queen and everything is in place,” drag artist Dulce Strutts said. “There’s nails. There’s earrings. There’s hair. You have to get hip pads and keep them in place. That dedication is definitely something younger queens like me need and look up to, especially when creating our own styles of drag.”

The word drag dates back to the late Victorian era and refers to the heavy dresses male actors wore while performing as women— the skirts would drag along the stage.

When the artistry of drag and LGBT Liberation Movement clashed in the early ’70s, the art form experienced its full graduation from stage performance to empowerment. In the United States, drag queens — and drag kings — strutted into underground nightclubs in cross-dress as means of expressing their various sexual identities.

“I identify as gender-fluid; part of me is female, part of me isn’t. But, obviously, I was born male.” – Angelina DM Trailz

Angelina DM Trailz posing as her role model Lady Gaga while dressed in a costume from the starlet’s collaboration with Beyoncé. (Photo credit: Gianna Marie Navarro)

It’s no secret most drag performers are gay men, but not all drag queens identify as transgender. A transgender person is someone who feels their emotional and inward identity does not match the gender given to them at birth. The selected gender sticks with them through every moment of life, inspiring some transgender people to seek out surgical transformation.

The Popularity of Celebrity Impersonation-Illusionism

If you want to be the best— study the best! Most drag performers find inspiration in natural-born women, often leaning on the strength of women in their personal life and celebrities.

“Celebrity impersonation is not only looking like the character, but embodying their mannerisms— what they do, how they act, how they walk, how they hold their mouth,” celebrity illusionist Lana Blake said. “If they have a slight cross to their eye, you cross your eye doing their performance, so that the audience believes that’s whose entertaining them.”

Trailz hit the stage about a year and a half ago. He has dressed as Celine Dion and Amy Winehouse, but his hallmark impersonation is the infamous Lady Gaga. He said the artist and her team inspire him with their work. Plus, he said it also helps that he kind of looks like her.

Trailz said when Gaga was in Houston for Super Bowl 51, he was mistaken for the actual super star.

“Someone tried to take a picture of me and it went viral,” he said. “People thought she was actually there, and I was just laughing my butt off.”

Trailz said celebrity illusionists keep the memory of the stars, especially late ones like Winehouse, alive for their fans.

Whether a queen is emulating a celebrity or performing her own character, drag is an outlet that has a powerful purpose in the lives of the men and women who participate in it.

“I love myself,” Trailz said. “I got to love myself doing drag, too.”