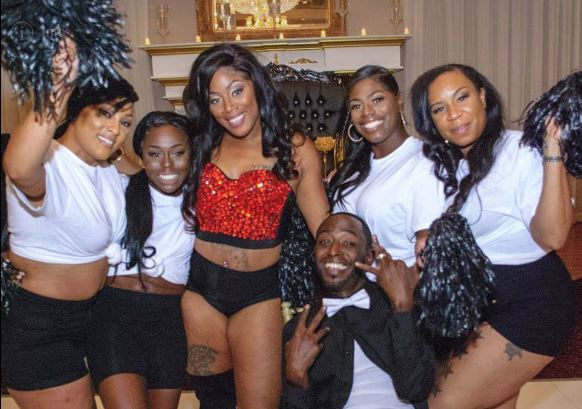 EDITOR’S NOTE: So many people have jacked this content, putting stamps on it like it is theirs, but the ORIGINAL FOOTAGE was SHOT by the AUTHOR of this article, who is not only the owner of this blog, but was a guest of the wedding and friend of the bride. Any questions….. Enjoy!

HOUSTON — It’s a wedding unlike anything you’ve ever seen before. A bride, wearing sexy SHORT shorts, thigh high boots, a bustier and a Mardi Gras mask made an entrance into her reception that the crowd surely had never seen before.

To those who know and love her, Stephanie Kamay James has always been one hot firecracker, and they were used to her energetic, larger than life personality. But when it came to the day she became Mrs. Justin Payne, they knew they were in for one heck of a party — but guests may have not been quite ready for what was really in store.

The build-up was quite impressive, and caught everyone off guard.

This Houston bride is breaking the internet!

Yes, show'em how it's done! ?? This Houston bride is breaking the internet after an EPIC wedding reception. Smooth moves, four bridal outfits — the couple says they wanted to bump tradition and do a reception that was uniquely theirs! Read More: bit.ly/2LBLZV2

And she serenaded her husband when she reached the front, finishing off her wedding march song, “This is Why I Love You,” by Major.

The next outfit change was a floor-length, backless white gown that showed off her Southern curves as she and her husband jammed into the wedding reception for their first dance as a married couple.

And then, the bride stepped away for yet another outfit change.

When she re-entered the room, this “true to herself” woman showed her groom and her attendees exactly why they love her so much….because she is full of life and knows how to bring a crowd to its feet!

Enter the bride… rump shaking to a hot mix, turning a forward flip, then trotting toward her husband and sliding across the floor in a split — perfectly timed out to stop at his feet.

And the guests — well, they were all on their feet, yelling with excitement and amazement.

We could explain more, but you have to see it to believe it, and a member of our CW 39 Houston was there to personally shoot the footage that other media outlets across the city are re-posting as it blows up the internet.

Oh, and before we go… we must give a special shout out to the groom for his “Don’t want to be a playa no more” entrance.

Congratulations to the lovely couple and check out all the footage! Remember ….”Do YOU!”

You only live once so LIVE more than just a little, live A LOT…and let others live their best lives in the judgment free zone.