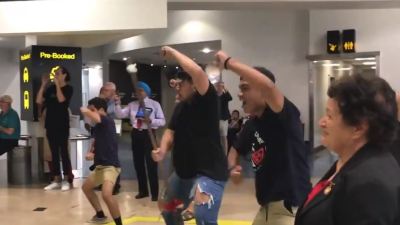 MUST WATCH: Now this is how you say ‘welcome home’! Intense ‘Haka’ war dance performed at airport

AUCKLAND, New Zealand — Now this is what we call a “Welcome Home!” Although this video was posted on social media months ago, it is still gaining many likes, comments and shares on various platforms.

It is intense and moving, and stirs emotion for almost anyone viewing it.

According to a post by Live Nation Australia and New Zealand, Alex Aiono, who is of Maori heritage, was greeted by his family performing Haka at a New Zealand airport.

Aiono, who is pushing luggage, comes to a halt when he sees his loved ones standing before him, ready to perform the war dance. Then Aiono, fanny pack across his shoulder and chest, joins in, while others in the airport watch and record. It is all quite moving.

So…that left us to do a little research to explain…What is Haka?

According to Wikipedia, the Haka (plural Haka, in both Māori and English) is a traditional war cry, war dance, or challenge in Māori culture. It is a posture dance performed by a group, with vigorous movements and stamping of the feet with rhythmically shouted accompaniment.

From more snooping around the net, it appears the Haka was made famous on the internet by the New Zealand Rugby team. We searched the internet and found some more great Haka performances at weddings, and an emotional one performed at a teacher’s funeral.