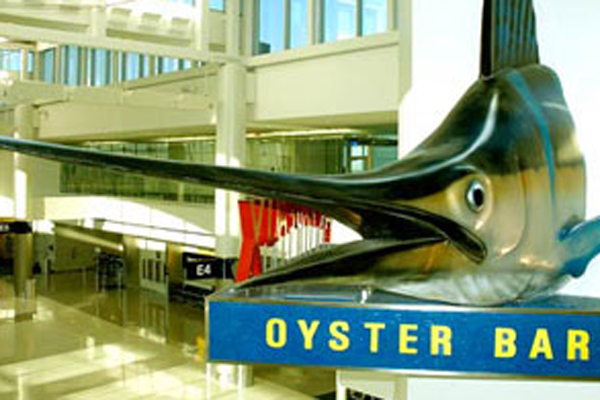 Hey Houston!  Did you know that when traveling in and out of town, you can still grab a great, gourmet-style meal right at the airport?  A recent study listed one of Houston’s airports as one of the best places to grab a meal.

There is definitely one hot spot in Houston that stays jam-packed on Friday and Saturday nights; and that is Pappadeaux Seafood Kitchen by the Reliant Stadium.  I personally stayed the heck away in the past because I was not sure if people were there to eat or socialize.  Well, I guess the restaurant chain’s food speaks for itself because according to Delish.com, Food & Wine’s ultimate airport dining survival guide lists Pappadeaux Seafood Restaurant at Houston’s George Bush Intercontinental Airport (Bush IAH) as the SECOND-BEST PLACE IN THE NATION to get fine food at an airport! Well, go figure!

Only to be bested by Prime Tavern at New York’s LaGuardia Airport.

Tagliare At this pizzeria by Dominick DeMarco Jr. (of the famed Brooklyn Di Fara pizza family), hungry flyers can get a classic New York slice without ever leaving the terminal (Terminal D).

Pappadeaux Seafood Kitchen Like Louisiana, its neighbor to the east, Houston has its share of Cajun and Creole food. This regional chain serves gumbo, jambalaya, shrimp Creole, and dirty rice (Terminal E, Gate 3).

Pink’s Hot Dogs (photo) The legendary Hollywood hot dog shack — customers have been lining up at the original stand on Melrose and LaBrea since 1939 — opened an outpost at LAX in July. Hopefully the line at the airport to sample the likes of the Lord of the “RINGS” dog (topped with barbecue sauce and onion rings) or the Martha Stewart dog (topped with relish, onions, bacon, chopped tomatoes, sauerkraut, and sour cream) won’t be quite as long (Tom Bradley International Terminal).

La Brea Bakery Those who want to avoid a trip through security should head for the sandwiches at this well-known L.A. bakery (Terminals 1, 2, and 7).

Encounter Restaurant At the center of LAX is the 1961 Theme Building, a freestanding structure designed to look like a flying saucer. It’s home to this space-age restaurant, known for 360-degree views, stylings stolen from The Jetsons, and California-style dishes like organic salads and mushroom ravioli with grilled asparagus (Theme Building).

Want to know what other places come in between and after.  Check out the list of the top 25 places to get fine airport food at Delish.com.