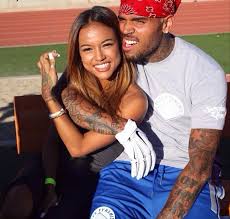 HOUSTON — After several failed attempts, Karrueche Tran was finally was able to have her ex-boyfriend, pop star Chris Brown, served with a restraining order. Unfortunately for him, it was during his 28th birthday celebration in Houston.

According to TMZ, Brown was leaving his birthday bash at Grooves nightclub when a process server slapped him with papers … and he was pissed!

[CLICK HERE TO SEE THE VIDEO OBTAINED BY TMZ]

Court documents state that Tran claims Brown has threatened to kill her and has physically abused her while the two were dating. She says Brown, who was charged with beating another ex — superstar Rihanna — allegedly kicked her down a flight of stairs, punched her in the stomach, threatened to shoot her and made other death threats. The pair dated from 2013-2016. Tran says she is no longer afraid and is ready to face off with Brown in the courtroom. Brown was in Houston for the 22nd stop of “The Party Tour,” which also included New York rapper Fabulous and West Coast rapper, OT Genius, whose most notable songs include “Cut It” and “In Love with the CoCo.”

Gots ta be mo’ careful! We hope everyone gets it together soon!