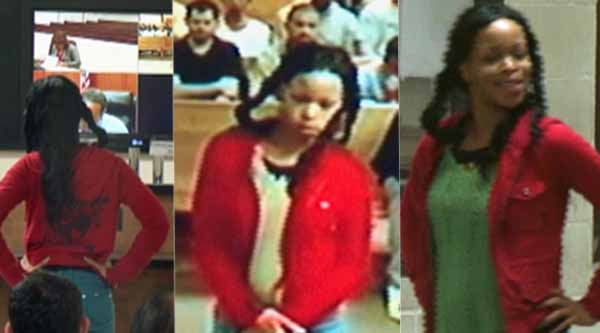 HOUSTON – Body language says a lot.   Shaeryll Hunter, the pregnant woman who is accused of pinning her pregnant rival with a car during an argument allegedly over a man, walked away and smiled after hearing charges against her read aloud in a Harris County courthouse Monday night.

Hunter, 26, was arrested earlier that day after being on the run since allegedly crushing Alise Kelley’s legs with a car on March 28.

Hunter has two children with Chris Chaney and is also five months pregnant with his third child. Kelley, Chaney’s new girlfriend, is also having his baby. She is four months pregnant. Police said that may be the main reason the two women were arguing.

Chaney said the two women were arguing on the phone when Hunter got mad and drove to the house he shared with Kelley in the 9600 block of Ravensworth Drive.

“I was in my house asleep, and then one of my kids’ mothers came,” Chaney said the day the altercation occurred. “I mean, they been texting and talking over the phone saying they want to fight each other and meet up right here and do it.”

Chaney arose from bed after hearing all of the commotion.

“When I came outside, I seen my kids’ mother (Hunter) punching on the window and she wanted to fight the other one,” Chaney said.

That is when Hunter allegedly jumped into Chaney’s car and gunned it, pinning her 21-year-old rival between the car and the house. After she drove off, Kelley’s legs were twisted. One of her feet had to be amputated.

When asked if the argument was because of him, Chaney smiled and gave a shocking answer while talking to someone on his cell phone.

Chaney was not the only person smiling during this entire ordeal.

During her court appearance, Hunter stood before the judge showing little emotion, at first, with her hands on her hips. She only spoke once, saying that she would be hiring her own lawyer.

As she walked away, she looked at the cameras in the courtroom and smiled.

Hunter was charged with aggravated assault with a deadly weapon, a felony, and a misdemeanor case of failing to provide identification.

In addition to Hunter and Kelley, Chaney said he has children with two more women.  In all, he has four kids and two more on the way.  Kelley’s unborn baby survived the attack.

For all of the related stories and videos in this case, go to KHOU.com.