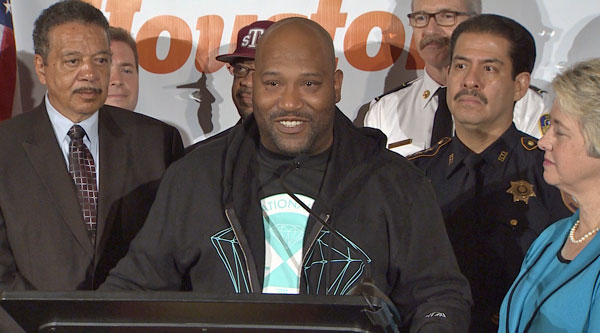 HOUSTON—Houston Mayor Annise Parker enlisted an A-list hip-hop legend with major street credibility to help her tackle the growing problem of texting and driving among teens. Bun B of the rap duo, UGK, joined the mayor at City Hall Tuesday as she launched her anti-texting-while-driving campaign.

The mayor is launching a full public awareness campaign, focusing on schools, in an effort to make young people understand just how dangerous texting and driving can be.

The Houston Police Department and the Houston Fire Department are going to schools as part of their regular presentations conducting workshops, but Mayor Parker wanted someone who could “connect” more with the youth.

“We have lots and lots of statistics, but statistics really are something that really kind of wash over people and they just go about their lives. What we want is to have that people-to-people connection and we want people to recognize that it can be cool to do the right thing, it can be smart to do the right thing and it is not just mayors and school teachers and parents lecturing,” she said. “It’s people in the popular culture who recognize that this is a problem and who kids are used to listening to in other context, so it is my honor to introduce local rapper, Bun B.”

The rapper said he was honored to be selected to join in the fight and would do all he could help spread the word.

“As a person that has a bit of influence with the younger people of the city of Houston, I felt it was imperative to be a part of this program. Our young people, unfortunately, unlike ourselves have learned to text and communicate with these electronic devices before they learn to drive. So they are incorporating that into their driving,” he said. “As human beings we are creatures of habit, most of us are used to doing what we are used to doing and usually these habits are only things that affect us, but when your habit is texting and driving, it not only puts your life in danger, but many other people’s lives in danger.”

Texas Southern University, the University of Houston and Rice University, where Professor Bernard “Bun B” Freeman helped teach a class merging hip hop and theology, are part of the initiative, including other community colleges.

Together, with the city’s top officials, they are hoping to drill it into the brains of the young that this is a dangerous habit and should be taken seriously.

Mayor Parker said the fight is more than a legal fight; it is about common sense and understanding.

“There is a bill pending in the state legislature to ban texting while driving statewide. We want to see what happens at that level. If it does not get passed and signed into law, I am prepared to begin the discussion with city council about a local ordinance,” Parker said. “This is really not something that is going to be solved with a new law, although it will help, this is something that gets solved by setting a community standard that says “enough is enough, this is not accepted any longer.”

Bun B is a rapper that stays involved in the community. We are very proud to have covered many stories involving him and the community. Year after year, he performs for free as part of the Hip Hop for HIV campaign, in addition to holding concerts to help end Hunger. He was recently inducted into the Gulf Coast Hall of Fame in Port Arthure, Texas.