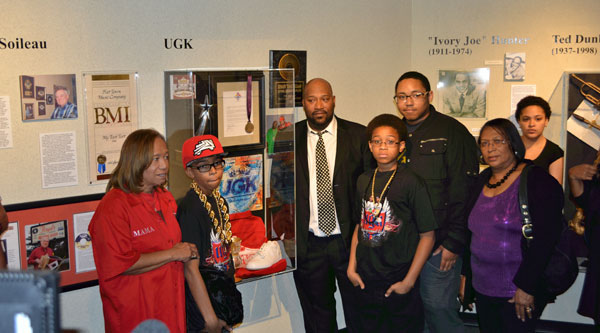 Bernard “Bun B” Freeman and Chad “Pimp C” Butler, both considered urban legends in their own right, formed UGK in 1987.

They are most popularly known for their 1999 feature on the single “Big Pimpin” by fellow hip-hop artist Jay-Z.  That collaboration would garner the duo their first Grammy nomination.

The Port Arthur Historical Society voted the duo into the Music HOF unanimously.

Ami Kamara, the museum curator, said they are the first rap group to be given the honor.

“I think it’s really great when your own community recognizes you,” said Kamara. “Sometimes it’s harder to make it at home than it is to make it in the greater world.”

Pimp C’s career was cut short while the duo was on an all-time high. The rapper was found dead in a Los Angeles hotel room on December 4, 2007. He was 33.

His family said being recognized by his hometown makes them proud.

The artifacts included in the exhibit are BET awards for Best Group and Video of The Year for “International Players Anthem” off of their 2007 release, “Underground Kingz.”

A letter from the Grammy Recording Academy, a UGK Vinyl Record, the “Pimp cup,” and a shirt and pair of white sneakers made iconic by Pimp C are also on display.

“This would be even more important to see than in a National Museum, because this is home,” she said.

The Museum of the Gulf Coast, Music Hall of Fame is located at 700 Proctor Street in Port Arthur.