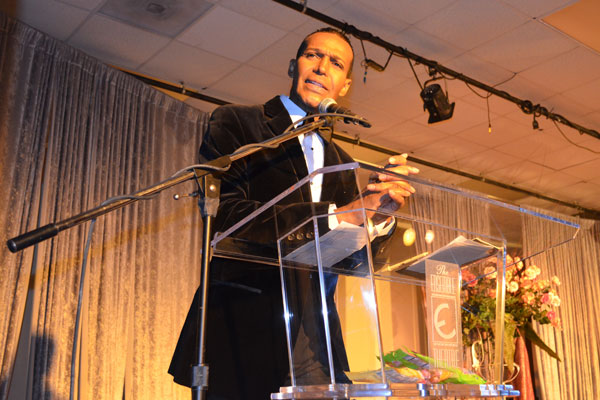 HOUSTON — World AIDS Day Houston closed out with a bang when The Ultimate Runway Fashion Show, hosted by Bravo’s Real Housewives of Atlanta Star Dwight Eubanks, used fashion and humor to bring awareness to the disease.

AMG Uptown Salon of Jacksonville, Florida and the show’s founders teamed up with The Houston Department of Health and Human Services-Bureau of HIV/STD and Viral Hepatitis Prevention, The Black Rivet Hair Salon and LAMIK Beauty to host the event in remembrance of those who have been lost in the fight.

Anne Grimsley, president of AMG Uptown Salon, said the African-American community and its youth are highly impacted by this disease; but that can change.

“I’m doing this to raise awareness in the young urban population because AIDS is taking over our young people,” Grimsley said.

The Centers for Disease Control reported in 2009 that while blacks only represent 14 percent of the U.S. population, they account for 44 percent of new AIDS cases.

Eubanks brought his usual humor to the show, but also stressed the importance of women knowing their status.

“Women talk about everything in the salon, so we go to different salons encouraging them to get tested and know their status,” he said.

A free HIV testing mobile unit was provided by the Houston Department of Health and Human Services.  A portion of the proceeds of the fashion show benefited Positive Efforts Inc., a Houston non-profit organization.

Barbara Joseph, founder of Positive Efforts Inc., said she was given one year to live after her diagnosis in 1982.

“I’ve been HIV positive 30 years today and back then it was a death sentence, but I’m still here raising cain,” Joseph said. “I’m tired, but I don’t think it’s from the disease, I’m just old now.”

Eubanks presented his February 2013 “Diamond Collection” line, along with Cache, Chabri, and K&G, who sponsored the event. E.G.O Clothing, Fashion Plate, and other local and national designers were also featured.

“We have something for all of you, the twigs as well as the full-figured,” Eubanks joked.

Fashion Plate by Zoe, a vintage line, featured many unique designs that the owner said can be layered and interchanged.

“This particular clothing can be worn any time of year. It is really about the expression of personal style,” Zoe said.

The designers presented their fall and winter collections with local models who stole the runway with their big personalities.

Tiara Hodge, star of Bad Girls Club 7, “kept it cute” with a smile during her runway appearance, strutting fall wear by Uptown Salon of Houston.

A brief intermission was filled with Eubank’s rendition of the “wobble” with his recruited co-host Kim, an eco-friendly designer.

Grimsley wrapped up the show stressing the importance of getting tested and an exclusive revealing of her on-site HIV test that was shown to be negative.

Go to KHOU.com to see full slideshow of the event!

Check out behind the scenes photos here: