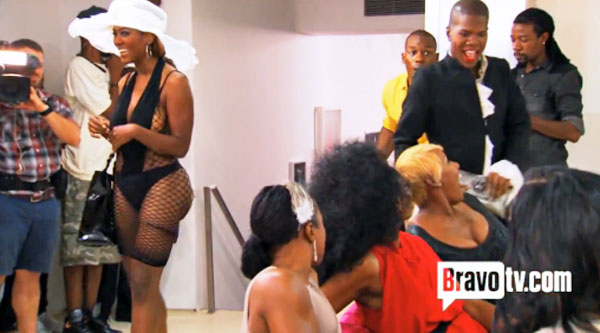 Kenya Moore and her banging booty ‘slays’ at charity event

Call her crazy, because we definitely think she is, but Kenya Moore is definitely pulling some stunts on this season’s “Real Housewives of Atlanta” that are keeping viewers tuned in.

Whether she was – or was not— ever in a “real” relationship with Walter Jackson, Mrs. USA will undoubtedly return for another season.  Bravo would be absolutely crazy not to extend her contract.

When they do, we hope they bring Marlo back.  Can you just imagine Marlo and Kenya on the same show?  Bananas!

Anyway in the latest episode, Kenya showed up to a Shoe Dazzle charity function wearing something that left little to the imagination. “Girl, I can not take how you are about to slay these people,” Ms. Lawrence said through fiery red lips as the two were pulling up to the event.

“I think this is the best way to show her (Phaedra Parks) you contradict yourself without even opening your mouth,” Kenya says. “Let me just show you how ridiculous you look!”

Enter the booty net/ mesh dress, the big a$$ hat and the fake Southern Belle accent.

Kenya’s outlandish costume was taking a stab at Phaedra for “defaming her character” in the midst of their “Booty Video Brawl.” Kenya was originally inking a deal with Phaedra to produce and distribute her “Donkey Booty” video, but when the deal fell through over a financial disagreement, Kenya decided to make a video of her own on how to create the perfect posterior.  What else did she call it?  “Stallion Booty!”  That is throwing some major shade.

Then Kenya showed up to the charity event, which was spotlighting NeNe Leakes’ shoe creation, wearing a remake of Phaedra’s Anguilla dress and thong get up, complete with booty pads.

Nene did not find the event was the appropriate battlefield. “This is a charity event, I mean some of the women could not believe that a woman had walked in with her ass cheeks out,” Nene said.  “This bitch done lost it.”

And Bravo has found it, and frankly, they might need it because most of the women were becoming quite boring.

Ms. “Gone With the Wind Fabulous” first started sparring with Porsha, a naïve little firecracker with the (a bit on the bossy side) NFL hubby who’s always telling her when it’s time to put someone “in check.”

Then the tables turned to Phaedra, Apollo and “Booty gate.”  (Apollo has become quite interesting since we finally get to hear him talk.) Kandi is still the hopelessly romantic mogul with the Midas touch, but, there are no fireworks in her storyline.

I bet the viewers breathed a collective sigh of relief when Kim Zolciak and her “Love muffin/ honey bunny” hubby Kroy left the show with kids in tow!  Thanks!

The most interesting thing this season about Peter and Cynthia is when they went to the strip club with the antique dancers, however, it is quite unnerving to see Ms. Cynthia be so messy with all the “tattle-telling.”

Nene is showing us all how it is to stomp with the big dogs and is doing so fabulously, but her new drama-free attitude is great, just not (that) exciting.  Her becoming a “Glam-ma” to her son’s precious baby girl is sweet and we love that she and Greg are getting back together.  We do love that the “original diva” who jumped this show off has shown personal growth and is on a meteoric rise!  So for us, she can still do no wrong… “Bloop!”

Still, you know we love (to hate) the antics!

“Crazy” Kenya is giving us just that and we bet she has more to bring.  (Phaedra should be a bit afraid because Kenya is training like Rocky Balboa to keep those cakes in shape and we women that flock to buy the video should be very afraid, too.  The workout just might kill us!)

Like Kenya said on the speedboat heading to Anguilla, “Hold on to your weaves, ladies!”

Check out a recap of Kenya cuttin’ up, courtesy of BravoTv.com.