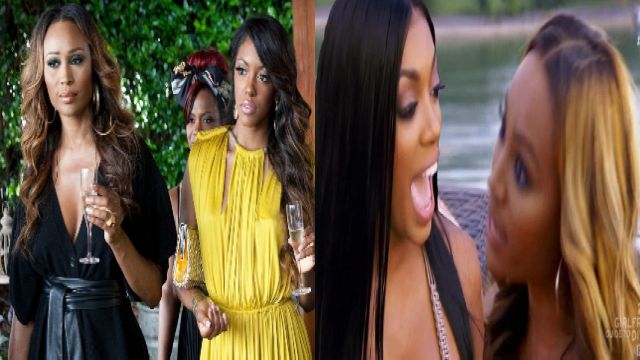 They may forgive, but they won’t forget.  All hell broke loose this past week when a fight broke out between Real Housewives of Atlanta stars Cynthia Bailey and Porsha Williams.

The two got into a physical altercation during a boat trip, hosted by Kenya Moore.

The “drama” began after a disagreement on the use of the “B” word being directed toward Cynthia.  After what appeared to be a “friendly” use of the word by Porsha, Cynthia wasted no time calling Ms. Williams out on her shade.

“Why you got to call me a bitch? It’s a respect thing,” Cynthia said.

In an attempt to calm Cynthia down, Porsha immediately told her it was all in jest.

“I’m just playing with you…are you mad at me for real?” Porsha asked.

Cynthia was still offended and the two women had a “stand- off” in what appeared to be Cynthia kicking Porsha in the stomach. Porsha was escorted off the boat at the request of Kenya Moore. (Did we really have to wonder?)

Now that the “dust” has begun to settle, the RHOA stars have spoken out publicly since the fiasco.

Cynthia apologized, admitting on her blog that she may have over-reacted.

“I think I may have misjudged Porsha’s intentions and overreacted,” she wrote.

Porsha also announced publicly on her radio show, Dish Nation, that she meant no ill will toward her.

Sources say that while the two have moved on and don’t hate each other, the two are definitely not best friends.

If you missed it, check out some of the scenes of the argument. Do you think Cynthia overreacted?