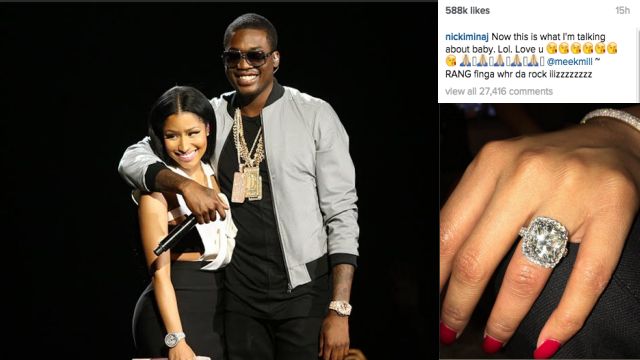 We see that rock! Do we hear wedding bells for Meek Mill, Nicki Minaj?

Rumors regarding Nicki Minaj and Meek Mill’s engagement are sweeping the web! Although Nicki said in a recent interview with Billboard that they are not engaged, we’re sure it’s closer than we think!

Rumors first sparked back in April when the “Super Bass” star revealed the birthday present given to her by Meek; a 15-carat yellow heart-shaped sparkler surrounded by diamonds.

“He and I are not engaged. But he said he would like to give me three rings before we get married,” Nicki said in the “Year in Music 2015” issue.  “I don’t know what’s going to happen with he and I. I just know right now we are really, really enjoying each other’s company. So, shout out to everybody in the world that’s just trying to find love or be happy. Everybody should have someone to hold at night. It really, really changes your energy. I find that my energy is very different afterward — if I’m in the bed with him, just hugging him all day. It’s just, like, something about love. You transfer it. It’s infectious,” she said.

She also talked about her upcoming ABC sitcom about her childhood.

“I am maybe too involved. Two days ago I was in casting. I’m going back tomorrow. I found one girl who I’m obsessed with who might play me, and someone who could rival her. So I’ve been coaching them both. I do a beat, let them rap. I do little dances with them. It has been magical. I didn’t even know I had it in me, but I love children so much,” she said.

Nicki ‘s voice will definitely be front and center with the project.

“Well, I narrate this show, like Chris Rock narrates Everybody Hates Chris. It was little differences that made that show stand out. I want to have those nuances. My first day, I said to the casting director, ‘This will not be a clichéd black show.'”

Nicki also spoke about serious issues in America regarding drug enforcement policies, the Obama presidency, and people of color and influential strength from Hillary Clinton.

“I do want to speak about something specific, which just melted my heart. I thought it was so important when he went to prisons and spoke to people who got 20 and 30 and 40 and 50 years for drugs. There are women who are raped, people who are killed and [offenders] don’t even serve 20 years. I was blown away, watching the footage of him speaking to the prisoners. They never felt like anyone in the White House cared about them. I loved that he made them people again. Because we all make mistakes. I think about how many men may have made a mistake to feed their families and then had to pay for it forever.”

“I support her as a woman. Am I convinced that she should be the next president? I still want to be open-minded about everyone. Obviously, I identify with her struggles as a woman. I identify with the fact that when she’s in that room and there are nothing but men there — there’s sometimes something in her that must feel intimidated. But I think that she uses that and turns it into a strength. Because that’s what I’ve always done. And so I love her for sticking it out. She has gone through horrifying things, even within her marriage. She has been brave and weathered the storm. And continued being a boss. That’s something that every woman should feel inspired by, no matter if you’re voting for her or not.”

The rapper also spoke on the issue of Maya Angelou’s poem “Still I Rise” at the “Shining a Light: A Concert for Progress on Race in America.” She received much criticism regarding her fashion sense and sex appeal, but Minaj is always quick to fix the opinions of others.

“It was the most spot-on poem that Nicki Minaj could have ever read. And it’s funny; it ended up proving a point,” she told Billboard. “Because I remember going online after and lots of people said such beautiful things. But there was one lady, an older black woman, who said, “She shouldn’t be reading that poem.” And she discussed how I dressed. I love that she said that, because she doesn’t even realize the poem is discussing sexiness, owning your sex appeal. “Does my sexiness upset you?/Does it come as a surprise/That I dance like I’ve got diamonds/At the meeting of my thighs?” And this woman, she was discussing her PhDs, all this education she had — but she couldn’t put two and two together about the theme of the poem. My entire career has been that poem in a nutshell.”

The “Shanghai” star also revisits her New York roots, as she states that there will be a mixtape in the future since that is how she first started.  “Definitely. The way I focus on metaphors and punchlines — that’s a very New York, Philly, East Coast thing. When I started, we were very battle-driven, so every line mattered. We had to try to destroy your life, and we were ruthless and very smart with wordplay. To make anything with a double meaning, you’ve got to be smart,” she said.

Nicki believes producing a mixtape helps her revisit her past, as she leads by example for other female rappers.

“Well, I want to touch a couple of beats that I wasn’t on. I could have bodied a lot of the records that came out in the last year. But the main thing is, I have to set an example for female rappers. I’m at the top of that food chain, and it’s important to lead by example,” she told Billboard. “And because I came into the game doing mixtapes, I want to make sure women do not forget the importance of that grind, that walk up to the top. You can’t get there with a song. Because once that song is no longer hot, you’re no longer hot. It’s important that you are bigger than your music. Some fans are going to f— with me for the rest of my life because they know where I came from. Fans know my struggle. How hungry I was. That I was not settling, I was not giving up. I was on everybody’s beat. I was ruthless.”

The issue will out on December 19, 2015, make sure to check her exclusive interview!