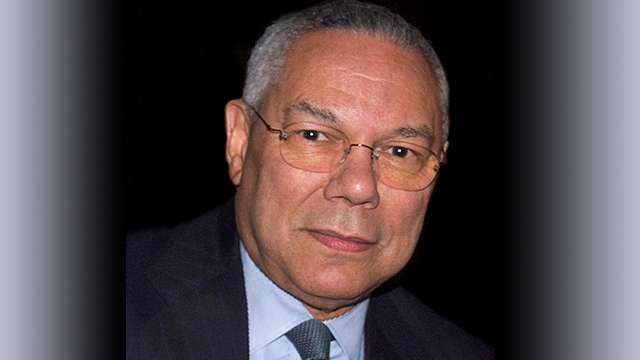 Retired Gen. Colin Powell, former secretary of state and former chairman of the Joint Chiefs of Staff, will deliver the commencement address at Rice University May 16.

“We are deeply honored to have such a respected national leader and extraordinary public servant as our commencement speaker,” Rice President David Leebron said. “We chose Gen. Powell in part because he represents the very best in leadership, and the imperative of leadership is a message we increasingly intend to bring to our students as part of their education. It is fitting that one of our country’s most revered leaders should launch our graduates into their own careers. Gen. Powell’s life story and his many contributions to the United States will inspire our students as they think about how they can make a meaningful difference in the world.”

Leebron said that Powell will spend time after the commencement address talking privately with faculty and staff members about the role of higher education in developing leadership potential.

Born in Harlem and raised in the South Bronx, Powell was educated in the New York City public schools and then earned a B.S. in geology at the City College of New York (CCNY). His experience in the Army ROTC program at CCNY launched his military career. After receiving a commission as an Army second lieutenant upon graduating from college, he served in the U.S. Army for 35 years and rose to the rank of four-star general.

Powell was the first ROTC graduate, first African-American and youngest officer to serve as chairman of the Joint Chiefs of Staff. He served in this position for Presidents George H.W. Bush and Bill Clinton from 1989 to 1993 and oversaw the Panama intervention of 1989 and Operation Desert Storm in the 1991 Persian Gulf War. Prior to becoming chairman, he served as President Ronald Regan’s national security adviser from 1987 to 1989.

Powell was appointed the 65th secretary of state by President George W. Bush and was unanimously confirmed by the Senate. He served from 2001 to 2005, including when the Sept. 11 terrorist attacks on the U.S. occurred in 2001. He led the State Department’s efforts to address and solve regional and civil conflicts in the Middle East and other parts of the world. He also helped advance American efforts to advance economic and social development globally.

In his post-government and post-military years, Powell has championed educational, business and societal issues. He is chair of the Board of Visitors of the Colin Powell School of Civic and Global Leadership at CCNY. He is the founder and chairman emeritus of the America’s Promise Alliance, which is committed to ensuring that children have the fundamental support needed for them to succeed. He serves on the board of Bloom Energy, an alternative energy company, and is chairman of the Eisenhower Fellowships, a cross-cultural program for emerging national leaders.

Powell is a member of the Council on Foreign Relations Board of Directors. He serves on the Executive Leadership Cabinet of the Martin Luther King Jr. Memorial and on the board of the Smithsonian Institute’s African-American Museum of History and Culture. He is honorary chairman of the education center for the Vietnam Veterans Memorial.

In 1995 Powell received an award for distinguished public service from Rice’s James A. Baker III Institute for Public Policy.

A committee of undergraduate and graduate students worked with the Office of the President to select the commencement speaker. Melissa Marschall, a professor of political science, served as faculty adviser to the committee. David Vassar, senior assistant to the president, also served on the committee.