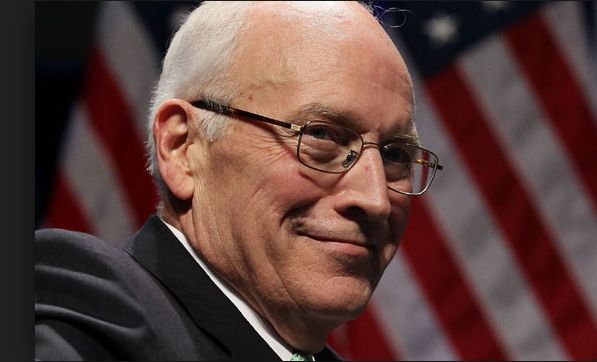 Dick Cheney talks to Playboy about Obama, both Bushes, 9/11 and “our uncertain future”

“I look at Barack Obama and I see the worst president in my lifetime, without question—and that’s saying something,” says former vice president Dick Cheney in a momentous April issue Playboy Interview.  “I used to have significant criticism of Jimmy Carter, but compared to Barack Obama and the damage he is doing to the nation—it’s a tragedy, a real tragedy, and we are going to pay a hell of a price just trying to dig out from under his presidency.”

In addition to expressing his very candid criticisms of President Obama, Cheney sat down with Fox News chief Washington correspondent James Rosen for a lengthy and wide-spanning Playboy Interview that lasted nearly 10 hours over three days.  From his recollections of slinging hash at Yale and his daughter’s coming out to perspectives on China, Ferguson, and Guantánamo, the outspoken ex-VP unleashed his opinions on matters domestic, international, public and private.

Following are a selection of quotes from Cheney’s fiery discussion with Playboy (April issue on newsstands and iplayboy.com Friday, March 20, with the complete Playboy Interview.

On whether or not President Obama has undone the Bush administration’s work:

“Oh absolutely.  Where do you start?  The way Obama is functioning now, he’s crippling the capacity of future presidents to deal with future crises.  It takes a long time to build up that military force.  And I am absolutely convinced there will be a future president—two or three times down the road, perhaps—who will be faced with a major crisis and will not have the military capability he needs to deal with it.  We are limiting the options of future presidents because of what is happening to the defense budget today.  I can go on for hours.”

On the damage being done as a result of President Obama’s foreign policy decisions:

“I came to town in 1968, and I have never seen people I have known in some cases for a quarter of a century—foreign leaders, especially in the Middle East—who are so terribly frustrated, angry, frightened.  ‘Whatever happened to the United States?’  There’s a conviction they can’t count on us, that our word doesn’t mean anything.  I had a prominent Mideast leader talk to me when I was there last spring.  First time I’d ever heard him say this; he’s always been very self-confident and very much in command.  He said, ‘You assume there is no political price to be paid for those of us over here who support the United States—wrong assumption.  It is sometimes a real question of leadership these days whether or not it’s smart, politically, for us, with our people, to be friendly to the United States.’  Our friends no longer trust us, and our adversaries no longer fear us.  We’ve created a huge vacuum in that part of the world, and ISIS has moved in big-time.”

On what the Obama administration needs to do to repair that damage:

“First and foremost, we’ve got to rebuild the military.  You’re not going to be able to do anything long-term if your diplomacy’s not credible, and your diplomacy’s not going to be credible if you don’t restore U.S. military capability—and we are going in exactly the opposite direction.  We’ve got to demonstrate that we’re an administration that believes—if we can get such an administration—that the U.S. has a major role to play in the world as the leader, that it’s backed up by significant military capability, that we’re prepared to keep our commitments in various places around the world and make it very clear to friend and adversary alike that the U.S. is going to be the kind of formidable player we have been for most of the past 70 years.  When I look at Barack Obama I see a guy who is not part of the consensus that has governed Republican and Democratic administrations alike since Harry Truman’s day.  The U.S. has to play a leadership role.  And it’s going to take a lot to rebuild the damage that has been done over the past few years, because we’ve actively conveyed to the world the notion—this president has—that we no longer believe that.”

On President Obama and Attorney General Eric Holder suggesting that criticism of them is tied to race:

“I think they’re playing the race card, in my view.  Certainly we haven’t given up—nor should we give up—the right to criticize an administration and public officials.  To say that we criticize, or that I criticize, Barack Obama or Eric Holder because of race, I just think it’s obviously not true.  My view of it is the criticism is merited because of performance—or lack of performance, because of incompetence.  It hasn’t got anything to do with race.”

On the Ferguson tragedy:

“It’s always a tragedy when there is a death involved and so forth.  But it seems to me it’s a clear-cut case that the officer did what he had to do to defend himself.  He was perfectly within his authorities to take action.  I don’t think it is about race.  I think it is about an individual who conducted himself in a manner that was almost guaranteed to provoke an officer trying to do his duty.”

On the difference between China and Russia:

“As I look at China, it’s obviously still a communist system.  But I look at China as a place that has achieved phenomenal growth economically.  They have so far been able to maintain their overall political structure while dramatically advancing their ability to be an important part of the world economy.  We are heavily intertwined, our economy is, with theirs.  They have moved hundreds of millions of people out of abject poverty into a more prosperous lifestyle.  I think that it’s a strong, dynamic economy with significant military potential.  And I don’t see that anything like that has happened in Russia.  It doesn’t mean there isn’t corruption in China; I think there is.  But I think we’re far enough into one another’s economy that we’ve got a better feel for how we measure their progress, their levels of production and so forth.  I mean, we’re into their knickers a long way and vice versa.  Russia—I don’t think they’ve ever really made that transition.  I think their economy is much shakier, much more dependent on a single resource: energy.  And I think the level of corruption is probably higher there than in China.”

On the possibility of China engaging in a military conflict with the U.S.:

“I have not thought in the past that China’s interested in a head-on conflict with the U.S.  It’s not in their interest or in our interest.”

On the opinion that 9/11 has been allowed to assume an outsize role in national security policy over the years:

“I just disagree with it.  I don’t think it’s right.  I think it sounds a little bit like Obama going to Cairo, his first year in office, sort of the center of the Muslim world, and apologizing, saying the U.S. overreacted to 9/11.  I don’t buy it.  We did what we felt was necessary and needed to be done, that a key priority for us after 9/11 was to make sure it never happened again, and we devoted a lot of time and energy and resources to exactly that effort—I might add, successfully.”

On whether or not the measures he and President Bush put in place to defend America after 9/11 were unlawful:

“I think we did those things we needed to do to make certain that we were operating within the statues and the laws.  And we bent over backward to adhere to the law, to not do something that was, quote ‘torture,’ et cetera, et cetera.  So I feel very good about it.  I don’t spend a lot of time worrying what the critics have to say about it.”
On defending Guantánamo:  “There were arguments about Guantánamo, and periodically after we set up Guantánamo there would be a burning desire on the part of the State Department to close Guantánamo.  And I can’t count the hours we spent in what I considered to be—obviously others [chuckles] had a different view—a totally wasted exercise, arguing about ‘Let’s close Guantánamo.’  It’s still open today.  It’s still there for a reason.  You’ve still got a couple hundred really bad guys, terrorists, who you need to have someplace you can keep them.  You don’t want to bring them to the United States and give them the rights and prerogatives they would have as an American citizen in a legal proceeding.  If anything, we’ve let too many of them go, in terms of those who have returned to the battlefield.”

On the possibility of innocent people being held at Guantánamo:

“I didn’t sit around wringing my hands at night worrying about an innocent terrorist down in Guantánamo.  I mean, these were people we captured on the battlefield or caught in the act, and they were well cared for, treated far better than they would have been in their own country, in terms of the facilities, the services that were provided for them and the things we did to meet the highest standards.  They’re probably better than some of the municipal jails here in the United States.”
On his time at Yale (before flunking out):  “The dean at one point wrote a letter to my dad saying that I had ‘fallen in with a group of very high-spirited young men.’  We did a bunch of stupid stuff you do when you’re in college.  I’ve never dwelled on it or written about it, and I don’t plan to.”

On if he ever struggled with his daughter Mary’s coming out:

“I always thought George W. Bush agonized over it more than I did, when he informed me he was going to support a constitutional amendment basically to ban gay marriage, same-sex marriage.  I can remember having lunch with him at one point, and he was trying to explain to me what he was going to do.  And of course he knew about Mary, and that’s partly what stimulated his concern.  He was worried that somehow I would be offended by what he was doing.”

Click here to read the full interview on Playboy.com.