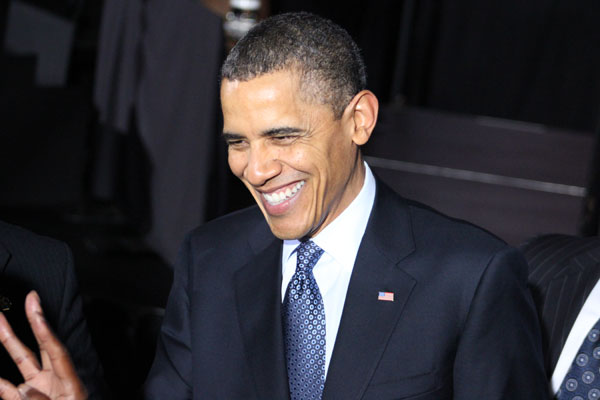 Union Station was buzzing with attendees, who paid $500 per ticket, waiting patiently to hear from the man of the hour.

Due to rainy weather that evening, the president’s expected 5:30 p.m. arrival time was delayed for nearly an hour, but nobody seemed to mind.

“I’m an Obama Man,” said former Astros player Wynn to the waiting crowd.  “Support him and the economy will come back. Keep the faith.”

T-shirts worn by a group of Texas Southern University students summed up the general idea of the night.

“We’ve got your BA(ra)CK,” was prominently displayed on the shirts, telling the president that they “had his “back.”

With the storm brewing outside, a bigger — and more exciting — storm was brewing indoors as loyal supporters mixed and mingled ahead of the big moment.  I was already worn out from a very long day, but their energy kept me pumped.

My work day had already started 12 hours earlier…and my night had not even begun.  I took to the Twitter airwaves to share my experience.

The first event I ever attended for Obama was four years ago at Houston’s Toyota Center when I was a senior at TSU.

He was the Democratic candidate with the “Yes We Can” campaign slogan, but those words changed to “Yes We Did” when he beat out John McCain to become the 44th—and first black – president of the United States.  Now, he was the incumbent fighting for re-election.

The man who many critics say is too laid back, showed he was a fighter when he took center stage at Union Station.  He did what he did best—delivered a powerful speech and electrified the crowd.

“If you are willing to work as hard in this election as you did in the last one, change will come,” Obama said.

The president had that personal touch that made everyone feel like he was walking with them.  He acknowledged the other political leaders in the room, which included Congressman Al Green and Congresswoman Sheila Jackson Lee – and he gave a “shout out” to the TSU students “in the house.”  His words were temporarily drowned out by the cheers of the college students – who clearly showed – they would show up on Election Day.  They “got his back” (remember) – and he knew it.  He let them know he had their backs as well.

“I never said I would be a perfect president, but I did promise you that I would get up every day and do my best.  I kept that promise,” he said.  They clapped.  They cheered. They screamed his name – all while the iPhone videos streamed and the photogs (including myself) snapped away.

Obama revisited some of his goals (health care, student loans and taxes for the wealthy) and stressed  that it would take another term to “right the wrongs” of the country.  He reminded everyone of the declining economy before he took office.

“They think you have amnesia. They think you’ve forgotten how we got into this mess,” Obama said of the Republicans.

He spoke of more changes to come.

“The recovery is accelerating. America is coming back,” he promised.  And once again, they believed.

The president left the stage and circled through the people clamoring just to shake his hand, then headed to River Oaks for a dinner held in his honor.  Tickets for that fundraising event were $38,500 per person.  You would not have known it was a “Red State” by the money raised that night.

One more thing happened that evening that I feel I must share.  I had a “stop the press” moment when a woman working security actually expressed her disbelief to me (while she was searching my bags) at the depths many went through to be in the same room with the president. After I went through the “blink twice before blank stare” phase, of course, I had to put her “on blast” on Twitter.   (She must have been there just for the overtime.)

“#Obama..Woman WORKING SECURITY said 2 ME she couldn’t believe ppl waited hours 2 see HIM..I said many have been waitng a lifetime. The nerve,”  I tweeted.

But just in case she doesn’t know, I can tell you what my day was like.  I went in to work at KHOU- 11 at 5:30 a.m.  Left at 11 a.m. to head downtown, went through early check in, shooed away after that, went to the Ballpark Inn across the street from Minute Maid Park, remoted in to work to finish my web duties while I waited for re-entry, went back to Minute Maid Park for official Media check in at 3:30 p.m., waited until 6:30 p.m. for president, snapped my photos, took my notes, left the event at 8 p.m., headed back to station and uploaded the photo slideshow to KHOU.com, then left the station for the final time at 11 p.m.  That is what you call a full day of waiting.  And trust me, it was all worth it…..Just to get close to a piece of history…peep the pic below:

Lip Service:  News with Attitude is not openly endorsing ANY political candidate.  We blog about events.

View our complete slideshow below: