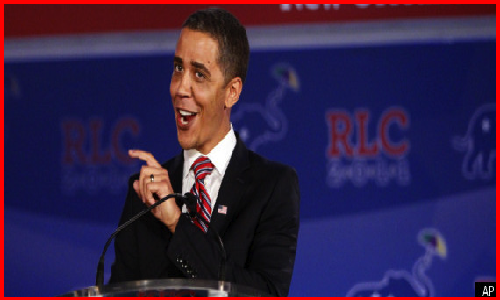 NEW ORLEANS – Obama impersonator Reggie Brown made a roomful of Republicans uncomfortable Saturday after he mocked the president – and the Republicans – at a GOP forum.

The actor/ comedian started off by making what some considered to be inappropriate remarks about the president’s biracial roots.  Obama has a white mother and his African father is from Kenya.

“My mother loved a black man and, no, she was not a Kardashian,” the actor said, comparing the president’s real mother to the Kardashian women.  It has been well-publicized that two of the Kardashians—Kim and Khloe—have dated many black men.  Khloe is married to Los Angeles Laker Lamar Odom and Kim in now engaged to Kris Humphries; both black.

As if Brown did not start off bad enough, things got even worse as he zeroed in on more of the GOP presidential hopefuls.

Brown turned tables on the candidates who are looking to make Obama a one-term president and took a shot at former Minnesota Gov. Tim Pawlenty, saying Pawlenty missed the conference because “he’s having his foot surgically removed from his mouth.”

Brown was referencing Pawlenty’s struggles this week after previewing his criticism of Romney’s health care overhaul in Massachusetts that was a model for Democrats’ national plan. Pawlenty first called it “Obamneycare,” a hybrid of Romneycare and Obamacare.

But brown would not stop there; he made fun of Romney’s Mormon faith and polygamy, and Rep. Michele Bachmann’s tea party support.

That is when organizers decided they had enough.  They turned off his microphone, turned on the music and got him the heck off the stage.

If you ask us, he should have been stopped with the racial jokes, but I guess nothing is as funny as it seems until the dogs are barking in your own backyard.

Want to see his act?  Watch the video below: