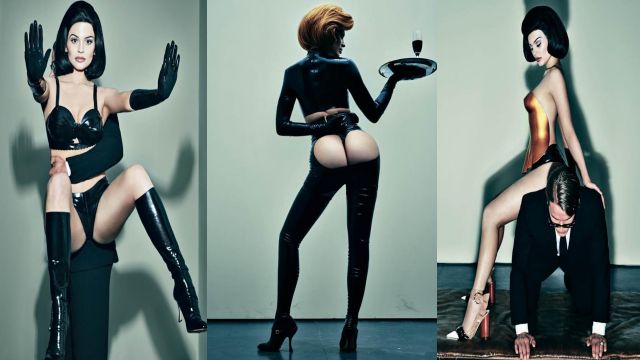 Kylie Jenner opens up in the new issue of Interview magazine, while she shows off some extra booty!

In a couple of other images, Kylie is in a black and copper wheelchair with a black latex body suit. The last few images portray the teen as a human blowup doll depicting blank stares and stiff body movements, as she is shown sitting on a man with a gold body cast and black latex briefs. Her last photo takes the cake of the blowup doll image as Jenner is lying down in a wooden box with bikini bondage. The box top reads, “Fragile. This End Up.”

Kylie spoke with Chris Wallace about her appearance, make-up, social media, her personal influences, and childhood experiences while discovering her personality.

“What I think is so amazing about having everything, and feeling like I have everything, is that I don’t really find happiness within materialistic things. Like, it’s cool if I can buy myself a new car, and I think it’s amazing for a week, but then the thrill is over, and I’m like, ‘Oh, so I guess that wasn’t really happiness.’ I’ve realized through the years that I just find happiness in other things, whether it’s my dogs or my friends or, like, looking at the sunset. So if I were to wish for something else, it would just to be happy all the time, to have a superpower of not letting things affect me, and to be true to who I am, always,” she said.

“I feel like it is exactly like that. It comes along and you just have to appreciate it. But I always just try to stay sane and not read comments. It’s hard though. You get interested. I’m young and I’m a girl, so, when I post something, I want to see what people are saying or what they think of my photos. I’ve found it better if you don’t read anything and you just always stay off that track. I’m just trying to not lose myself through this process, because I feel like I’ve already lost parts of me, like, my youth,” she said.

“I feel like if I came out and just told my story about bullying, people wouldn’t have sympathy—and I’m totally okay with that, because people don’t need to understand; they just think I’m not a normal person and live this magical life,” she said. “But I wanted to give other people who have been bullied, and who overcame it to do something amazing, the opportunity to use my platform to bring awareness, to inspire people.”

Jenner has no shame in being herself outside of the Kardashian name. She talked about her sister, Kendall, college, becoming a businesswoman and her real exterior when the cameras are not rolling.

“I would probably just never dress up. I would never wear makeup, because I honestly hate wearing makeup. Lately, I’ve just been so over it. I feel like I’m way too young to wear such heavy makeup all the time. It’s just bad for your skin, but I’m always doing photo shoots or red carpets and events, so I just obviously want to look good. And I don’t know, I like hiking. I used to do a lot of hiking when I wasn’t as busy. I had a lot of anxiety when I was younger, so I would just run to this hill path in the back of my mom’s house and listen to Jack Johnson. I would listen to Jack Johnson and stare at the sky until my anxiety went away. When I was 16, I was always outside. We always watched the sunset, the group that I was friends with,” she said.

Jenner also expresses that she plans to grow her business, step out of Hollywood in hopes to having a family with her own farm by the age of 30.