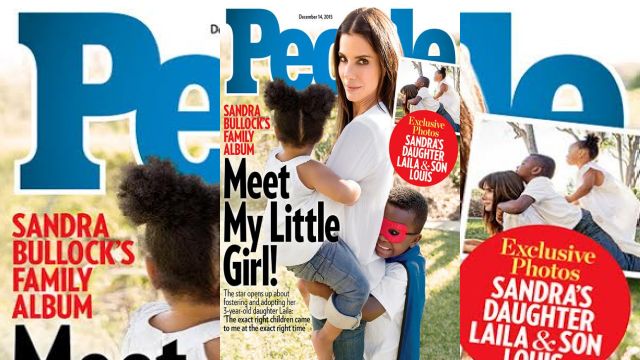 Oscar winner Sandra Bullock will appear on the December issue of People’s magazine! But she’s not alone, and is ready to share her daughter with the world!

Back in 2010, Bullock kept her first adoption a secret with her son Louis Bardo Bullock. Now she’s back with a new addition to her family, 3 year-old Laila Bullock from Louisiana.

In a recent interview with People, the Blind Side star explained why she kept her adoption process a secret and how she did it. She also told the magazine that she did not share the details with anyone in order to protect her daughter’s privacy.

“From the ruse I had to construct so that Louis didn’t have to lie to his friends at school, to the stories I constructed for friends and coworkers as to why I was absent all the time, the subterfuge was pretty elaborate,” she said. “But there is always the chance that the bonding process wouldn’t happen or that the CPS [Child Protective Services] workers would feel I wasn’t a suitable match. So I had no problem lying and fabricating stories to keep things on lockdown.”

Aside from the protection of Laila, Bullock said that she did fear that the attention of her stardom would affect the adoption process. In doing so, keeping her daughter hidden during the process was a difficult task. She denied the expansion of her family in October at the Our Brand Is Crisis press conference.

“It felt very much like witness protection,” she said.

The anonymity proved to be difficult.

“Unbeknownst to me, a photographer had followed us and taken a photo of us in line,” she said. “The next day, I learned that a photo of her was being shopped around for sale to every outlet around the world. I had promised and legally agreed to protect her from something like this, and here I was chasing down lawyers—having them begging them to keep her safe—and tabloid outlets were claiming so many things that were inaccurate. All this just for money. I had to make sure CPS [Child Protective Services] knew what was fact and fiction.”

“It was dangerous because you are asked to sign a confidentiality agreement stating that you will not release any photos of the child to a third party to protect their identity—and here I found myself in a position where her identity could be revealed. I was sure she would be taken away. The one person who should be protecting her above all else had put her in harm’s way.”

Bullock also shared why the privacy of her family is more important now than ever. After the adoption of her first son, Louis, and now Laila, she feels it is her job as a mother to ensure the safety of her children, while considering their past situation in the foster system.

“Most foster children are in foster care because they were taken from their birth homes under tragic circumstances—and the last thing I wanted was to bring more harm to her because of the nature of my job,” the actress said.

There’s no doubt in Bullock’s mind that Laila was the perfect addition to the family, while she describes her family as “blended and diverse, nutty, and loving and understanding.” Her son Louis wasted no time getting acquainted with his new sister taking on the big brother role.

“Their personalities are as different as night and day. Where Louis is the quiet watcher and doesn’t need to be the showman, Laila is the performer. Turns out she has fallen madly in love with Bruno Mars and knows all the words to the videos—that are appropriate!—and the only way to get her to go to sleep is to show her photos of Bruno and tell her he called and wants to know if she’s going to bed,” she said.

Now with a prince and princess, Bullock has her hands full, especially if Laila is quite the performer! The Miss Congeniality star didn’t fail to mention her consistent positivity throughout the process. Although she was not seeking a daughter, the options during the process never seemed to work out in her favor until now.

“I knew that we would find our family—we just needed to be patient. So when Laila came into our lives, we just had to move over because she was coming no matter what, and she knew exactly how things were going to run.”

However, the excitement of her daughter also shot some nerves for Bullock as she revisited her complicated relationship with her mother during her childhood.

“And the thought that a daughter of mine would be anything like I was scared me senseless. But I am my mother’s daughter, and that has served me well…She didn’t want me to go through life shut down, afraid of feeling. Well, life has made sure I feel everything now, and I’m not ashamed of it anymore,” she said.