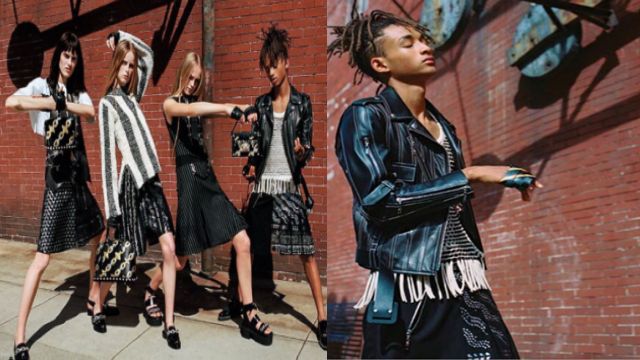 You wouldn’t believe who is the new face for Louis Vuitton’s Spring and Summer 2016 womens wear line campaign, Jaden Smith. Yes, Will Smith and Jada Pinkett Smith’s 17-year-old was chosen to represent Louis Vuitton by the creative director Nicolas Ghesquière.

Ghesquière made the big announcement in an Instagram post on Saturday with a picture of Jaden sporting a black skirt and a mesh fringed tank top.

Ghesquière explained why he wanted Jaden to be a part of the campaign.

“He represents a generation that has assimilated the codes of true freedom, one that is free of manifestos and questions about gender,” said Ghesquière in a Louis Vuitton press release. “Wearing a skirt comes as naturally to him as it would to a woman who, long ago, granted herself permission to wear a man’s trench or a tuxedo.”

Jaden is known for his several high-profile acting roles in the “Pursuit of Happiness,” “After Earth,” and the 2010 remake of “The Karate Kid.” Now he is making a name for himself in the modeling world, go Jaden!