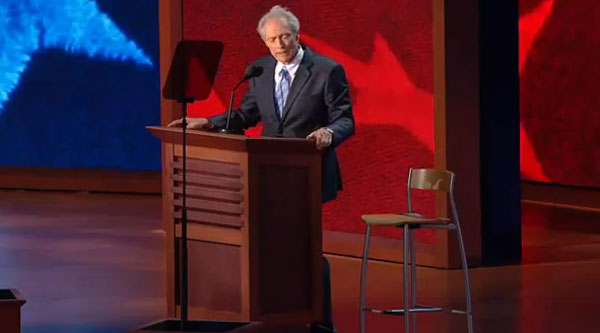 The elderly actor rambled on and on, scratching his head at times, as he talked to an “invisible” president who was supposed to be sitting in a chair on stage.

He first talked about the night Obama won the 2008 election, bringing change to America.

“Oprah was crying, I was even crying.  I haven’t cried that hard since I found out there was 23 million unemployed in this country,” he said, taking a stab at the jobless numbers.

He even answered the imaginary man sometimes.

“What do you mean shut up?”

“What do you want me to tell Romney? I can’t tell him that.  He can’t do that to himself.”

Then he went on to call Vice President Joe Biden a grin with a body behind it.

While the Republicans laughed, many others thought it was extremely disrespectful and WEIRD AS ALL GET OUT!

His own peers in the entertainment industry took to Twitter to express their distaste.

No one could focus on the “man of the hour” because “Dirty Harry” stole the show.

In Eastwood’s mind, the imaginary president told him to go and do something to himself..and of course, he answered..again.

“I can’t do that to myself either,” he said.

Well, the real, walking, breathing, visible president did not reply verbally, but sent out a Twitpic that sent a simple message to Eastwood.

He showed himself, sitting in a chair marked “President.”  His caption said. “This seat’s taken.”

Did you miss the skit?  Not to worry, it was posted on the GOP convention 2012 Youtube channel.