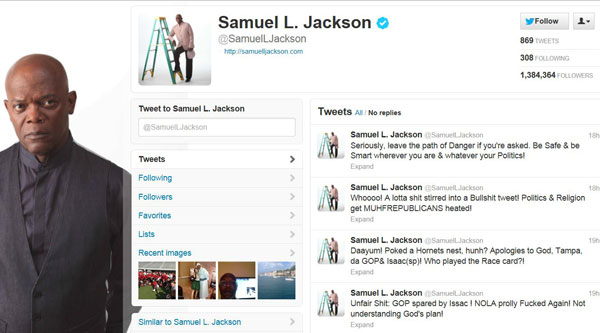 Samuel L. Jackson is learning that it might not be so good to mix two things – politics and hurricanes.  But if he is anything in real life like the brass-balls characters he so vividly plays, the always outspoken movie star doesn’t give a (fill in the blank here).

Jackson came under scrutiny after a Twitter post saying he wished Hurricane Isaac would head to Tampa instead of New Orleans.

Well, that ruffled a few feathers because Tampa is the site of the Republican National Convention.  Conservatives, Republicans and other teed-off people blasted the timelines with their “Go kill yourself” and “Boycott Samuel L. Jackson” tweets.

“#Samuel L. Jackson is just another fly on the pile of #shit that is American #politics. Nothing comes out of his mouth but bile,” one response tweet said.

“Advise to #Samuel L Jackson, you are one of the greatest actors of our time, please stick to it and don’t comment on politics,” another tweet said.  (Note the misspelled word “advice.”)

Well, Jackson replied and he let the jabs keep going.

In the end, there is nothing more to say.  He is an actor..not a politician…and he is entitled to say what he feels.  Even if it is a little insensitive with what could potentially happen with the storm blowing in.