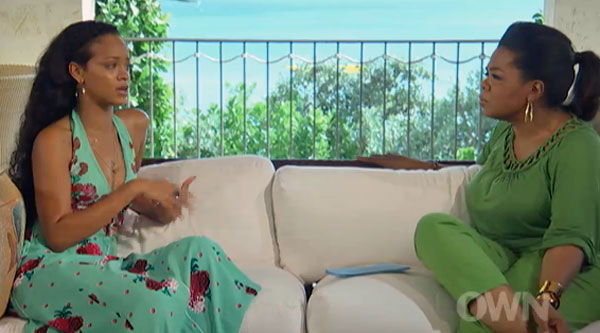 Rihanna tells Oprah that Brown is ‘love of her life’

It doesn’t matter what the world thinks you should do, matters of the heart are unstoppable.  Rihanna opened up to the Queen of Talk, Oprah Winfrey, about the love she still has for her ex-boyfriend Chris Brown despite the beating scandal that thrust the couple into an unwanted spotlight in 2009.

Rihanna said Brown was still the” love of her life” and she felt she lost her best friend almost overnight.

The singer said their lives became a circus and even though she was the one who was beaten, she felt like she needed to protect Brown.

Photos of a battered Rihanna lit up the airwaves after Brown beat her when the two got into an argument on the way home from a pre-Grammy party.

Brown pleaded guilty to the offense, but the two singers’ lives have never been the same.

It is easy for us to sit back and say what she should and should not do, and we all know people who stay in relationships after being assaulted by their partner, but these two were never able to privately work on anything because of public scrutiny.

Do you think they will ever be able to move forward….together?

Check out an excerpt from the video provided by the Oprah Winfrey Network.