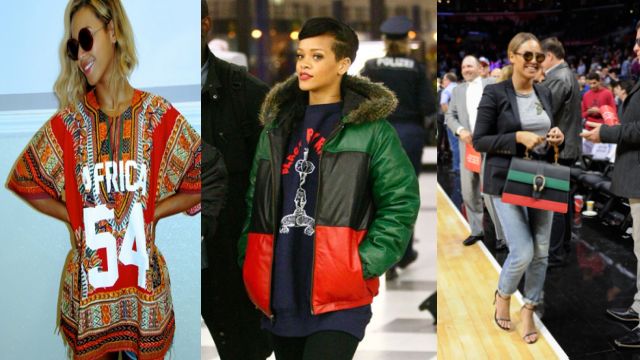 Black History might have ended in February, but that did not stop celebrities from rocking fashion forward African-themed trends.

Beyonce’ was recently seen with a purse that had a “Red, Black and Green” theme, otherwise known as “Pan African” colors, and paired them with earrings shaped like the content of Africa.

The “Formation” singer has definitely been on every one’s radar since her controversial and unapologetic “Pro black” performance last month at the Super Bowl 50 half time show. It appears her proclamation of her heritage is “rubbing” off on other celebrities who are no longer ashamed of the great “black pride” colors.

For some of you who may be wondering what the colors represent. Here is a brief history lesson. According to panafricanalliance.com, the meaning behind the Red, Black and Green colors in the Pan African flag was designed by Marcus Garvey and members of the United Negro Improvement Association.

Garvey was inspired to create these colors and incorporate them into a flag due to a song that released back in 1920 called “Every race has a Flag but the Coon.”

“Coon” was a racial slur used to describe Black Americans. The song implied that every race and creed had their own flag except for African-Americans.

Even controversial talk show host and actress Raven Symone’ was feeling her black pride wearing a dashiki black hooded jacket that had green, black and red.

If you’re thinking of wearing an ensemble like these celebrities, or particularly the Gucci purse Beyonce’ has, it may set you back a whopping $3500! However, the “African” shaped earrings come at a more affordable price starting at $10.

Power to the people. We love it! And let us give you all a throwback video of the Red, Black and Green movement from Stetsasonic.  Educate yourself!