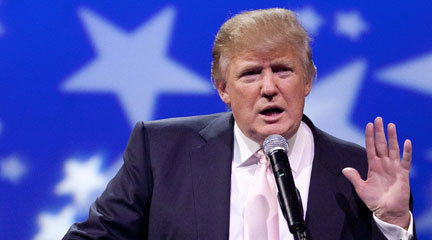 Trump barked, but would not bite on bid for presidency

NEW YORK  – OK, so he’s kicked up a lot of dust, called out the president on the so-called “birthers” scandal and had media outlets speculating will he or won’t he for months.  But it’s official, Donald Trump has announced he will NOT run for president.  But were we really surprised?

“I will not be running for president as much as I’d like to,” Trump announced Monday at a Manhattan hotel as NBC rolled out its fall lineup.

The real estate mogul and reality TV star said he has chosen to stick with hosting “The Celebrity Apprentice” over a bid for the Republican nomination.

Trump then said in a formal statement released by his office that he felt he could beat President Barack Obama in the general election, but had come to realize a presidential campaign could not be run half-heartedly.

“Ultimately, business is my greatest passion and I am not ready to leave the private sector,” he said.

In the past few months, Trump has been on a rampage of sorts, perpetuating falsehoods about Obama’s birth place and insisting that questions were unanswered about whether the president was born in Hawaii.

According to the Los Angeles Times, Trump’s popularity as a candidate began to slide in early May when the president released his birth certificate and indirectly cast Trump as nothing more than a carnival barker, poked fun at him during the White House Correspondents’ Dinner, and interrupted an episode of “Celebrity Apprentice” with news that Osama bin Laden had been killed. A recent Quinnipiac University poll found that 58% of registered voters said they “would never vote” for Trump.

The Los Angeles Times also said Trump’s show may not have gotten the boost he had expected from his media blitz: Nielsen ratings for “Celebrity Apprentice” are lower than they were a year ago. According to research provided to the Atlantic by the firm National Media Inc., the audience for “Celebrity Apprentice” is among the most liberal in prime-time television. It’s possible that Trump’s contentious interviews drove some viewers away.

In other words, Trump will not get a chance to tell anyone “you’re fired” from the Oval Office.  For now, the showbiz will just have to be left out of politics and the country will have to go back to focusing on the serious issues in this country; unemployment, immigration and WAR among other things.