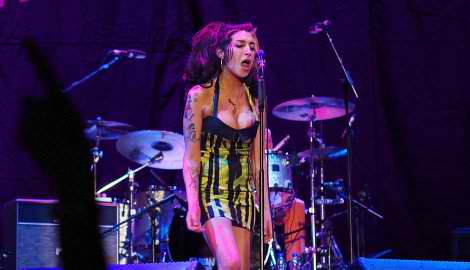 BELGRADE, Serbia — In a heartbreaking scene from Lady Sings the Blues (the Billie Holiday story), Diana Ross convincingly played a drug addict jonesing for “a fix” during a stage performance.  Unfortunately, it was the first thing that popped in my mind watching a clip of Amy Winehouse’s concert where she was booed and jeered in Belgrade.

After being more than an hour late to the first concert of her European tour Saturday, Winehouse stumbled onto the stage, mumbled through her songs and wandered around before an estimated 20, 000 fans.

The Daily Blic described the concert as a “scandal” and a “disaster.” They called her performance “the worst in the history of Belgrade.”

They even posted a clip of the concert with a warning label, “Listen if you dare.”

Winehouse, who has publicly struggled with drugs and alcohol, awkwardly danced around the stage and appeared unable to remember the lyrics to her songs. She dropped the microphone and occasionally disappeared, leaving her band playing instead.  A male backup singer even came to center stage to try and help her along, but nothing really worked.  Winehouse appeared confused and kept gesturing to someone on the side.

Fans complained they could hardly tell which song Winehouse was singing and responded angrily. Many walked out of the show, according to reports.

“It was horrible,” said Ivana Bilic, a fan. “She should have canceled the whole thing, rather than appear at all like this.”

Shelling out top dollar to see a performer only to be disappointed seems a bit unfair.  Tickets cost about $57 per person, which is very expensive in the country where average salaries are about $428 a month.

Winehouse recently spent a week at a rehab program in London. Her 2006’s “Back to Black,” won her five Grammy Awards, but her music has been overshadowed by drug use and run-ins with the law.

Her reps have canceled the tour until further notice.

We at Lip Service:  News with Attitude have no idea what was wrong with Winehouse during the show and can only speculate with the rest of the world.  But whatever it was, we hope baby girl can get it together.  We wish her well.