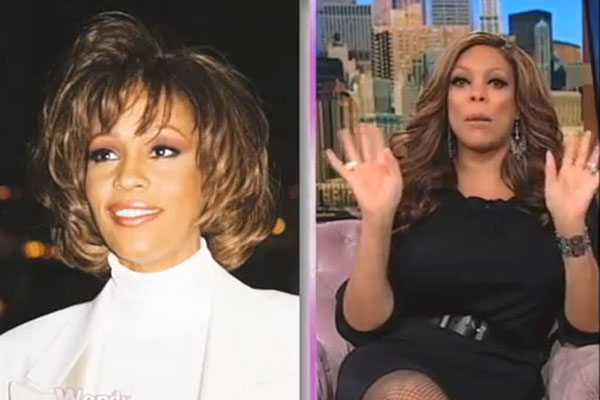 After Whitney’s death, Wendy admits to past crack addiction

Talk show host Wendy Williams—who is famously known for her ballsy, in-your-face, tell-it-like-it-is attitude—was visibly choked up and moved to tears on her show as she talked about the death of Whitney Houston.

Houston and Williams had never met in person, but the two “Jersey girls” had a highly-publicized run-in when Houston called into Williams’ radio show in 2003 to confront her about “being all up in her business.”  After that, the media buzzed about the Wendy-Whitney spat for years, but the talk show host said she actually loved and admired Houston, so she was devastated when she learned the singer had passed.

Williams then announced her decision that — in my opinion—shows she is high above the petty gossip that many are sinking to these days as they focus on the singer’s past drug abuse more than her accomplishments.

“Whitney’s death – everybody’s going to be talking about it today, tomorrow, next week.  After I say what I say, I’m not talking about it anymore,” she said.  “You’ll have to turn on Entertainment Tonight, The View—their hot topics, you know, I’m out, I’m out.”

Williams said over her 20-year radio career, she only interviewed Houston once.  She said the two successful entertainers had a couple of things in common; the love of their parents and the “demon of substance abuse.”

Williams said her one wish was that Houston could have overcome her struggles and the two could be clean and sober today.

“On behalf of me and anybody you might know who is going through a struggle with substance abuse, anybody—I don’t care if it is heroine, coke, pills, booze – reach out to that person,”   Williams pleaded.  “I’m one of the lucky ones.  Reach out to that person and call them out on it.  Because even if they don’t quit, once you call them out, it makes it harder for them to sneak around and get high.”

We at Lip Service:  News with Attitude love Whitney Houston and we respect Wendy for opening up.

Check out the heart-wrenching video below, courtesy of the Wendy Williams show on YouTube.