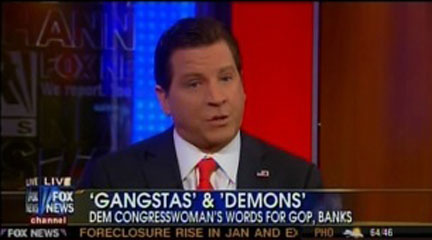 Fox host: ‘You saw what happened to Whitney, step away from crack pipe’

Disrespectful!  Fox and Friends news commentator Eric Bolling said he was just joking Thursday when he said that Rep. Maxine Waters should take heed to what happened to Whitney Houston and “step away from the crack pipe.”  Seriously?  Is this how we respect the dead?

“We have got to take back the House. I saw pictures of Boehner and Cantor on our screen [at the California state Democratic convention]. Don’t ever let me see again in life those Republicans in our hall on our screen talking about anything. These are demons,” Waters said.  A clip of the video aired on the morning show and Bolling decided to retort with his jaw-dropping comment.

Immediately after the commercial break, Bolling gave a back-handed apology for the comment.

“Alright, before we get started, I just want to say I was kidding about the crack pipe. Just kidding,” he said.

“Of course.  We knew that,” said Dooxy, dismissing it as political jabbing.

Hmmmm… taking jabs at a singer whose family and fans are in deep mourning over her sudden passing, not to mention the fact that she is not even in the ground yet – nor was SHE a politician.  All is fair in the land of the insensitive we guess.

Check out a clip of the video, courtesy of Politico.com.