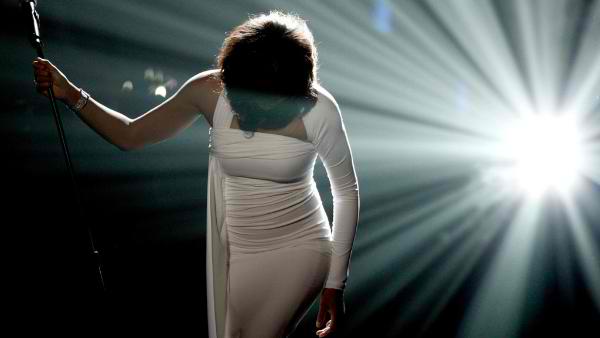 Emergency crews were dispatched to a room on the fourth floor of the hotel at 3:23 p.m.  They arrived to find Houston unresponsive and immediately began CPR, but she could not be saved.  She was pronounced dead at 3:55 p.m., according to Lt. Mark Rosen, Beverly Hills Police Department.

Houston was known for her regal, majestic voice and was one of the biggest stars in the 80s and 90s at the height of her career, but she remained in the spotlight with a mixture of career comebacks and public battles until her untimely death.  She inspired many performers and they flooded Twitter to express their condolences.

“I’m sad, hurt and angry. Because I did not want to see her leave us. Period.” — Terry McMillan

“R. I. P. Whitney Houston. I will always love you and your music and talents will live on forever.” – Billy Ray Cyrus

“A lot of us are just now realizing how many of our memories are connected to Whitney’s music. First love, first dance, first heartbreak, etc” – Bun B

“We have lost another legend. Love and prayers to Whitney’s family. She will be missed.”  – Christina Aguilera

“Very sad news about Whitney. My heart and prayers go out to her daughter and family.” – Ellen DeGeneres

“Whitney was the reason many of us do what we do. “a few stolen moments is all that we share” RIP” – Pink

“Please, please someone tell me it’s not true…” – Bette Midler

“Can’t believe we’ve lost another 1 of our Royalty. Sister Queen Whitney Houston. God Bless on ur journey as u now stand with the Most High.” – Busta Rhymes

“I’m honored to have worked with Whitney on Sparkle, shocked and saddened by her passing! Definitely a talent beyond human expression.” – T.D. Jakes

Houston was born into greatness. She was the daughter of gospel singer Cissy Houston, the cousin of Dionne Warwick and the goddaughter of Aretha Franklin.

Houston first started singing in the church as a child. In her teens, she sang backup for Chaka Khan, Jermaine Jackson and others, in addition to modeling. She soon caught the eye of music mogul Clive Davis.

“The time that I first saw her singing in her mother’s act in a club … it was such a stunning impact,” Davis told “Good Morning America.”

Davis’ pre-Grammy party was considered one of the biggest, star-studded events before the awards show and Houston was supposed to perform there the day she died.

Her death — just one day before the Grammys — left producers scrambling to change the show.  The show was already paying tribute to Etta James and Don Cornelius, who both recently died and a Houston tribute would have to be added.  It was speculated that Jennifer Hudson, who is compared to Houston, would be chosen to sing the tribute.

Houston made her album debut in 1985 with “Whitney Houston,” which sold millions and spawned hit after hit. She won her first Grammy for best female pop vocal for “Saving All My Love for You.”

“How Will I Know,” ”You Give Good Love” and “The Greatest Love of All” also became hit singles.

Another multiplatinum album, “Whitney,” came out in 1987 and included hits like “Where Do Broken Hearts Go” and “I Wanna Dance With Somebody.”

In addition to being an extraordinary singer, she was a talented actress.  In 1992, she played opposite Kevin Costner in “The Bodyguard,” and the soundtrack for that album gained her more Grammy gold.  The soundtrack was named album of the year and her version of Dolly Parton’s “I Will Always Love You” –perhaps her greatest hit to date – won record of the year and best female pop vocal.

She starred alongside Angela Bassett, Loretta Devine and Lela Rochon in Terry McMillan’s “Waiting to Exhale” and with Denzel Washington in “The Preacher’s Wife.” Both spawned soundtrack albums, and another hit studio album, “My Love Is Your Love,” in 1998, brought her a Grammy for best female R&B vocal for the cut “It’s Not Right But It’s Okay.”

Houston just completed the remake of the movie “Sparkle,” playing the mother of three beautiful sisters in a singing group.  That role was played by Mary Alice in the original movie which also starred Irene Cara and Lonette McKee.  “Sparkle” is scheduled to be released August 17.

Houston was once married to R&B singer Bobby Brown and the two had a daughter, Bobbi Kristina.

This article will not talk about the troubled marriage or the struggles with substance abuse.  It is not the time for that now.

Lip Service:  News with Attitude would just like to say:  I love you, I honor you, I respect and remember your greatness.  You were one of a kind, you were second to none.  Rest in Peace Ms. Houston.