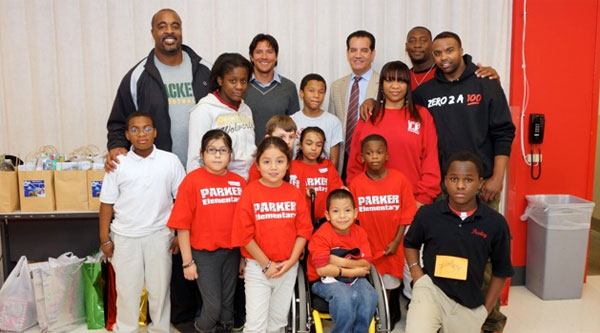 “Shop with a Cop, Shop with a Jock” was held Tuesday, December 17 at Target in the 8500 block of South Main Street.

Twenty children, who were chosen from the Houston Independent School District, were paired with a sponsor who helped them pick out merchandise to buy with their donated Target gift cards.

“During the holiday season, it becomes harder for disadvantage kids who come from single-family homes with several siblings and parents struggling to make ends meet. “Shop with a Cop, Shop with Jock,” will allow these kids to have an experience of a lifetime,” said HPD Officer Mary Young.

The cops and athletes were “larger than life” examples of what the kids could aspire to be, but local business owners and entrepreneurs were the true heroes of the day. The $200 Target gift cards were able to be purchased thanks to donations from Leslie’s Furniture, ABC Dental and Amerigroup.

Leslie Larose Nash, owner of Leslie’s Furniture in Missouri City, said her customers made it possible for her to give back.

“We would like to thank our customers for continuing to shop with Leslie’s Furniture which allows us to give back to the community,” Larose- Nash said. “We are thankful to be a part of “Shop with a Cop” and we are going to continue to give back to the city. That is what we enjoy doing.”

Larose- Nash, who was partnered with a preteen girl, said it was a rewarding experience escorting her kid around the store.

“It just felt great to be with someone that was really in need. I took her by the hand and we just shopped, like she was my own. She was very excited and she really felt pretty about herself, she got some shoes, undies and boots; and she enjoyed it. I did too,” Larose-Nash said.

Houston Texans Antonio Smith and Wade Smith, former Texans Chester Pitts and Travis Johnson,   Brian Ching and Mike Chabala of the Houston Dynamo, former Green Bay Packers Santana Dotson and honorary HPD Officer Jason Roy — who miraculously recovered and walked again after a police chase/ crash left him paralyzed in 2011–were among the participants who volunteered with the children.