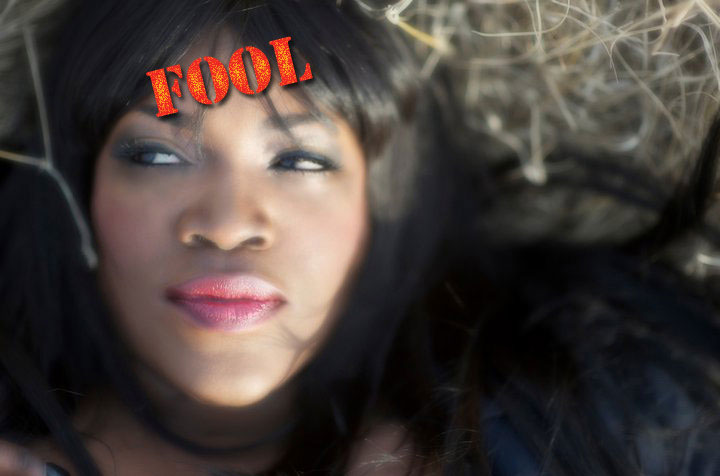 Take the ‘FOOL’ off your forehead and take control!

Sometimes it is OK to say to yourself, “Boy, have I been a fool.”  Because once you admit it, you can move forward with correcting it.  And many of us can use our fingers and toes to count the times we’ve been wrapped up in foolishness.

Lord knows I have had my share of mistakes; from everything like how I pick my “men” to how I trust my “friends,” I have had to ice the grill marks imprinted on my a$$ after getting burned a few times.

I imagine myself sitting at a bus stop like Forrest Gump one day telling my story; but instead of all of these wonderful occurrences happening in an innocently haphazard way, my reflections would be about doing silly things I knew better about and definitely reaping no rewards.  Stupid is as stupid does, right?

But if I know all of this, why do I keep repeating some of the same reckless behavior?  The same reason we all do!

You can go back to the quotes of the great philosophers, poets and grandparents (Socrates, Maya Angelou and your Mam-Maw) all you like to give yourself a little “boost” when you’ve fallen, but if you would have used your common sense and recognized certain warning signs, you would not need them.

I remember in the 90s TLC’s T-Boz, Left Eye and Chilli leading us in an anthem – that is still jamming today – asking “what about your friends?”

You know the lyrics:

What about your friends

Will they stand their ground

Will they let you down again

What about your friends are they gonna’ be low down

How many times have we let that same certain girlfriend—bestie—homie—or whatever you choose to call them get you in a bunch of mess – or rather stab you in your back over and over again.  But yet, after an “Awww, you know I didn’t mean it,” or “I was just drunk when I said that,” or “You know I wouldn’t have slept with him/her if I knew you REALLY liked him,” (insert fist-pumping and “Jerry” chanting here), you push all that aside because this friend/ backstabber is fun and you all can really turn a club out when you are together?

Now, a sensible person would know to cut the ties and move on…but not you; you say you are going to be “the bigger person” and will forgive your “friend” for the umpteenth time until the next falling out coming in 3…2….1….you get the  picture.

You know, it is OK to sever the ties sometimes and find like-minded people who have nothing to gain from hurting you to spend your time with.  It is hard venturing out, but it is definitely fun trying it.

There should be no “Ups and Downs in friendship.”  It is not that hard!  A friend is someone you call to share good news with, who roots for you, who actually cries with you when they see you hurting (instead of calling their other “friends” to gossip about how much of a “mess” you are) and who just genuinely loves you as you are..not because you have something to give or lend — without them returning —  AND VICE-VERSA!

We all see what is happening on the reality shows:  Bravo and VH1 are making a killing by the “frenemies” disguised as “Real Housewives” of some county/ city and “Basketball Wives” /ex-girlfriends of mostly-retired players.

I had to learn the hard way. I remember a huge lie told by someone I thought was my friend had our entire group of friends against me.  I remember balling up in my bed and crying at night wondering how anyone could believe those things.  It wasn’t until that same friend told a lie on someone else that the group apologized, but the damage was done.  I knew to keep a certain amount of guarded distance after that.   Hurt and pain are hard to remove from your heart.

And let’s not talking about love and relationships with the opposite sex (or same sex for some of you):

That’s a whole other barrel of monkeys!  It always starts out in a whirlwind.  He/she talks on the phone with you for hours, neither of you wants to be the first one to hang up first, you laugh at the corny jokes (even if you’ve heard it a gazillion times) and you just can’t stand to be away from or not hear from each other.

Then after the dust settles (or the condom hits the trash) the phone calls slow up, the texts to see how your day is going begins to get a little bit annoying to him/her saying maybe the two of you are moving a little too fast, the hand-holding in public all of a sudden becomes an unapproved public display of affection and the “I’m too tired, I just got off work” or “I have to go to work early in the morning” becomes a general excuse for not getting out together when –in the beginning – they would have moved heaven and earth for a moment of your time.

And don’t forget the granddaddy of them all:  the “I never said we were exclusive” statement.  When you knew you were looking for a serious commitment, you reduced yourself to being a contestant in someone’s dog and pony show in hopes that you would finally win the race.  Like Dr. Phil says, “How’s that working out for ya?”  Don’t answer, I think we already know.

Now, a sane person recognizes when sh**  gets shaky and knows to move on…but not you; you keep trying to “make it work” with a person who (forgive me for jacking the line) really was just not that into you!  Sorry mama/ poppy, they were just after what they thought you could give them for the moment – sex, money, a free meal or just as a distraction until the person they really wanted comes along or takes them back.

Hey, I don’t want you to think I am totally talking about myself – that would be dreadful – but not only have I experienced some things on this list, many of my male and female friends have complained about the same thing.

It’s OK when relationships (or the ones you hoped you were building) don’t work out..That doesn’t mean you are not fabulous..it just means you’ve been fabulously f***ed over by someone who probably does not know what they want.  Don’t sweat it and move on!

People say relationships are hard work – I understand that especially when two people who genuinely love each other have to adjust to certain lifestyle changes in order to make their union work, but trust me, it should never be hard getting someone to “fall” for you.  Either you are their cup of tea, or you are not..And if not, don’t worry, you ARE somebody’s flavor!

Stop wasting your time where you are not wanted or appreciated, take the FOOL off your forehead and start making wiser decisions!

Another topic to add to this could be loaning money to family or friends, but child…….the blog feed is about to run out!  You know your cousin…boy/girlfriend…sibling who doesn’t pay anyone else back is not going to pay you back – so keep your money in your pocket!