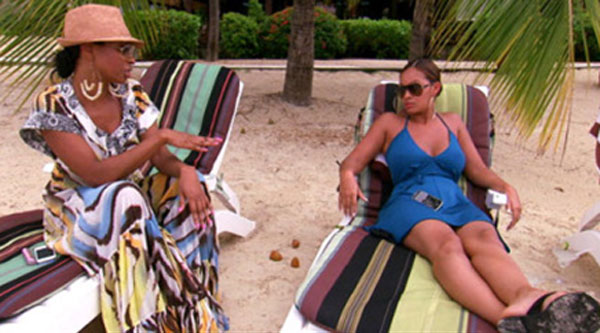 The train wreck known as Basketball Wives Season 4 ended last night the same way it started – with drama, gossip and petty bullcrap – with a little staged session between Shaunie O’Neal and somebody’s pastor remarking on how the image of the show was “having an effect on her.”  That’s right, Shaunie, damage control!

And smack dab in the center of it all is old lady Tami Roman barking about people “talking about her” as she talks about them.  Pathetic irony, you may say.

At the end of the show, Tami gets upset with Royce Reed—who was once her “bestie” when the other non-wives were laughing at her hair, nails and food stamp status—for coming to the defense of the younger, mild-mannered cast mate Kesha who is now the poster child for post-puberty bullying from a pre-menopausal woman.

During the ladies’ (and we use that term lightly) annual retreat, Tami also put in her two cents – with far less value – about Jennifer Williams’ decision to NOT make herself the target of bullying from Evelyn Lozada.  The trip to Tahiti was undoubtedly a forced contractual obligation in hopes that Evelyn would attack her cast mate with some coconuts or whatever else was within reach!

Even when the situation had ABSOLUTELY NOTHING to do with her, Tami constantly remarks how she is “irritated” that Jennifer is avoiding the crew.

This whole “Tahitian Treat” was one big mess!

Evelyn was publicizing Jennifer’s Vegas fling and “safe sex” or lack thereof business, Tami was stealing purses from defenseless women half her age and overstressing her vowels, poor Suzie Ketcham was trying to get in wherever the heck she could fit in and join in the “smelly fish prank” just to say she has SOME STRANGE REASON for being on the show.

Tami also led the pack firing questions at Kenya Bell on “what was Jen saying and what was Jen doing.”  Umm, but hold on..isn’t that what “Ms. Keep It Real Roman” does not want others to do about her – talk about her behind her back!

Then Shaunie and Tami kept trying to stir the pot saying how Kenya looked crazy and was staring angrily at Evelyn.  Well, wouldn’t you?  The last time they were around each other Evelyn threw a full wine bottle at Kenya’s head!

Anyway, I think Evelyn should be quite glad that bottle did not hit Kenya because while they call her strange and weird, baby girl looks like she would definitely take Evelyn on a short trip if locked in a room together.  Let’s not forget, the former Miss Michigan was arrested after allegedly pulling a box cutter on her estranged NBA husband, Charlie Bell.

After all the decent women were run off the island – Kesha, Jennifer and Kenya –the remaining crew were left to revel proudly about their bulls*t when they returned home.

These women formed a lasting bond that only bullies and other wild dogs share with a pack mentality.

In fact, the two biggest bullies (Evelyn and Tami) value each other’s friendship because Tami obviously respects the fact that Evelyn called her a “Non Motherf***ing factor to her face, in addition to profiting from T-shirts bearing the slogan and sleeping with Tami’s ex-husband and telling her about it on the show – because you see, in Tami’s eyes – at least Evelyn was keeping it real!  LOL!  How freaking sad is that!

And at the end of it all, Shaunie tries to quiet scrutiny by eating dinner with her kids and talking to a pastor about the negative images.

He hints maybe she should leave some in the valley and she –like Pinky and the Brain – takes a moment to “ponder” it all.

Shaunie – ex-wife of Big Shaq—obviously does not need any of the money she is profiting off the other women’s foolish behavior, but do you think she will abandon her pet project in the name of decency?  Likely not and of course, we will be tuning in for Season 5!